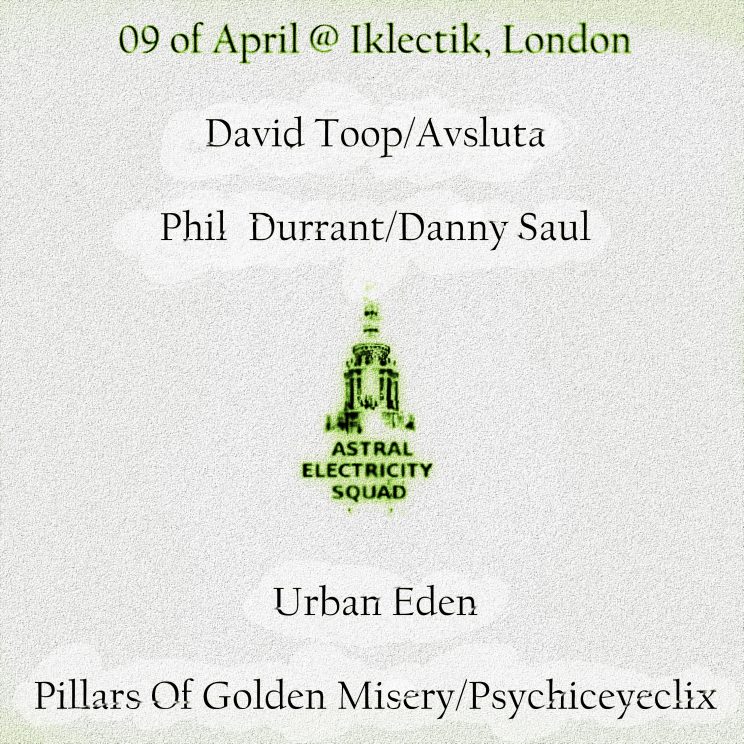 Pillars of Golden Misery is a dark ambient/ experimental noise project that splintered off from the more structured sounds of industrial group Non-Bio in 2018. Influences come from film soundtracks and vintage video game music. Favours the use of physical/circuit bent hardware for live performance and will be laying down a lot of drone for the collaboration with Psychiceyeclix.

A fluid approach to creation is employed, each performance uses different equipment & is specific to that time/place.

Sitar, electric prayer bowl & other ethnic instruments will be used in this collab with Pillars of Golden Misery

Liz Helman and Dominic Hemy met in 2019 at a gig (in Iklectik) in which they were both playing. With a shared love of drones and twisting soundscapes, they would quickly devise a plan that would sprout into Urban Eden. Approaching the project from very different roads, their first album, Building Gardens From Concrete, is in the final stages of construction, promising to blossom this Spring.

Liz Helman is a multi-disciplinary artist, working in time-based media. Her work, both visual and sonic, is a response to place and environment. Beginning her process with field recordings, she then makes immersive and mesmerising drone based compositions exploring different layers of sound and texture. Primarily using guitars and Theremins, Dominic Hemy has been crafting aural landscapes for over a decade as both a solo artist, and as one half of the eclectic prog-ambient experiment The Resonance Association.

Born near London in 1957, Phil Durrant is a multi-instrumentalist improviser/composer/sound artist who currently performs solo and group concerts.

As a violinist (and member of the Butcher/Russell/Durrant trio), he was one of the key exponents of the “group voice approach” style of improvised music. In the late 90s, his trio with Radu Malfatti and Thomas Lehn represented a shift to a more “reductionist” approach.

Recently, he has been performing solo and duo concerts with Bill Thompson, Mark Wastell, as well as his seven-piece group ‘If Herbie Went West Coast’, using a modular synthesizer system.

Durrant still performs regularly with the acoustic/electronic group Trio Sowari (with Bertrand Denzler and BurkhardBeins) and Mark Wastell’s The SEEN.

Danny Saul is a London-based composer with a background in rock and experimental music. He studied electroacoustic composition with David Berezan and his interests include synthesis, space, sound diffusion, improvisation and acousmatic composition.

In performance he often uses a combination of analogue synthesis and Max/MSP coding. As a composer for TV drama, he is assistant to the two-time Emmy award-winning composer John Lunn. Credited work includes music for the forthcoming season 4 of Netflix’s action drama ‘The Last Kingdom’ and series 6 of BBC’s crime drama ‘Shetland’.

Uncredited work includes music for season 3 of ‘The Last Kingdom’, series 5 of ‘Shetland’ and season 3 of Sky’s period drama ‘Jamestown’.

Avsluta (aka Lucie Stepankova) is a London-based Czech-born electro-acoustic composer, improviser and sound artist. Her practice is dedicated to deep listening and applied research of sonic embodiment and takes into account introspection, interoception and perception, unveiling a contingent world full of familiar, strange and yet unheard sounds. Lucie mainly works with synthesis, field recordings and object-oriented improvisation.

Avsluta (aka Lucie Stepankova) is a London-based Czech-born electro-acoustic composer, improviser and sound artist. Her practice is dedicated to deep listening and applied research of sonic embodiment and takes into account introspection, interoception and perception, unveiling a contingent world full of familiar, strange and yet unheard sounds. Lucie mainly works with synthesis, field recordings and object-oriented improvisation.

Their collaboration is described by David Toop as ‘Steadily, evening falling, apparition painting overlay the solidity of the world.’