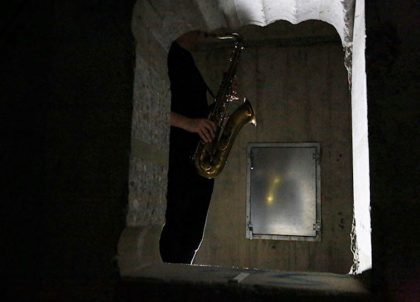 Butcher is well known as a saxophonist who attempts to engage with the uniqueness of time and place. His music ranges through improvisation, his own compositions, multitracked pieces and explorations with feedback and unusual acoustics. Since the early 80s he has collaborated with hundreds of musicians – including Derek Bailey, Rhodri Davies, Andy Moor (EX), Phil Minton, Christian Marclay, Eddie Prevost, John Stevens’ SME, Gino Robair, Polwechsel, Mark Sanders, John Tilbury, and Okkyung Lee.

Recent compositions include “Penny Wands” for Futurist Intonarumori, two HCMF commissions for his own groups, “Good Liquor Caused my Heart for to Sing” for the London Sinfonietta and “Tarab Cuts”, a response to recordings of early Arabic classical music which was shortlisted for a 2014 British Composer’s Award.

Bertrand Denzler is a Swiss musician active in the fields of contemporary improvised music, new music and free jazz. He is based in France and Switzerland.

As a tenor saxophonist, he has toured extensively in Europe, North America, South America, the Middle East and the Far East with regular ensembles, dozens of ad-hoc groups, artists from other disciplines (dance, performance, theatre, sculpture, poetry, video), as well as solo. He is or was a member of ensembles like Trio Sowari, Hubbub, Denzler-Gerbal-Dörner, The Seen, Onceim, Denzler-Grip-Johansson.

He has composed pieces for new music ensembles and musicians including Ensemble ReRe, CoÔ (Cordes de l’Onceim), Bondi-Denzler-D’Incise, Šalter Ensemble, CCP3, Félicie Bazelaire, Ensemble Hodos, Onceim and Horns, as well as for jazz groups like the Umlaut Big Band. He has also worked as a composer for Swiss filmmaker Christoph Kühn.

He has published texts about improvisation and experimental music in collaboration with Jean-Luc Guionnet, as well as with Burkhard Beins and Phil Durrant. He also gives improvisation workshops.

Alex Ward is a composer, improviser, and performing musician, working primarily with clarinet and guitar. His involvement in freely improvised music dates back to 1986, when he met the guitarist Derek Bailey. He subsequently took part regularly in Bailey’s Company events, and has gone on to become a major figure in British improvised music.

His current work includes the avant-rock duo Dead Days Beyond Help in which he plays guitar, sings and co-writes the material; various groups which perform his compositions-for-improvisers including Forebrace, the Alex Ward Quintet/Sextet, and the Item series of ensembles (the first of which, Item 10, debuted at Cafe Oto in September 2017); and improvising collaborations both regular and ad-hoc with musicians including Steve Noble, Dominic Lash, Kay Grant, Joe Morris and Weasel Walter. Besides his own groups and improvisational work, he also performs in ensembles including the Duck Baker Trio/Quartet, Thurston Moore’s recent multi-guitar projects Galaxies and New Noise Guitar Explorations, and Charles Bullen and Charles Hayward’s This Is Not This Heat. He brings a unique energy and inventiveness to all these projects, elevating them far above the ordinary and injecting them with a thrilling sense of danger and possibility. Much of his work is documented on the label Copepod, which he co-runs with Luke Barlow.

Adam Bohman has been operating on the outer fringes of underground music for decades. Working with home-built instruments, found objects, tape cut-ups, collages, ink drawings and graphic scores. Favouring acoustic sounds over electronics, he explores the minute tendrils of sounds coaxed from any number of non-musical instruments and objects. He is a member of British experimental groups, Morphogenesis, The Bohman Brothers, Secluded Bronte, and The London Improvisers Orchestra. Adam’s music is unique and experimental, incorporating Fluxus japery, musique concrete, sound poetry and free improvisation.

John Macedo is an artist and performer from London. He has incorporated everything from acoustic instruments and environmental sound to analogue and computer synthesis into recorded works, live performances, film, and sound installations. He has a pluralistic approach which explores connections and relationships while revealing the hidden potential in all sounds, environments and technologies, often in intimate, immersive and intuitive ways.

He performs live solo and has collaborated with a wide variety of musicians and artists including Phil Julian, Graham Dunning, Tom White, Yoni Silver, John Butcher, Cath Roberts, John Edwards, Michael Speers, Steve Noble, Sue Lynch, Lee Fraser and Adam Bohman, to name a few. He has had work released by The Tapeworm, Hideous Replica, Sound Holes, and Beartown Records as well as releasing small run and object editions on his own label, The Black Plume Editions. He has performed and presented work in the UK, Europe and US. He also programmes SOLO:DUO:TRIO, a concert series of experimental and improvised music at Cafe OTO in Dalston, London.