BUTOH RESIDENCY offers three days of live performances, films and a workshop that see Japanese and European musicians, dancers and artists working together to advance the global recognition of Butoh – both as a uniquely Japanese art form and as a vibrant international platform for communicating in or beyond all languages. Collaborating artists include pianist and vocalist Aya Ogawa and dancer Mushimaru Fujieda from Japan;  Butoh-Techno from Poland, French electronic musician Pascal Savy and, on film, performances by the late Sapporo based dancer Yoko Muronoi. 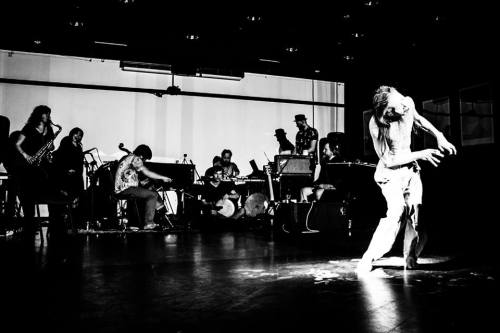 Formed three years ago out of a collaboration between the Poland based Shepherds of Cats and Japanse pianist and vocalist Aya Ogawa, Butoh-Techno is an international dance and sound spectacle bringing together the aforementioned improv ensemble, Maciej Piatek aka VJ Pietrushka, saxophonist/composer Matylda Gerber, Butoh dancer Mushimaru Fujieda and Ogawa.

Born in 1952 in Aichi Prefecture, Mushimaru Fujieda is now based on the rainforest island of Yakushima in Japan. He began working in drama in 1972 and then joined Ishin-ha company in 1978. Since 1989 he has gone out as an independent solo performer inside and outside of Japan. After receiving the highest praise from the late, great American poet, artist and activist Allen Ginsberg, Mushimaru was inspired to redefine his work as that of a Natural Physical Poet. In 1997 he received the Tobita Drama Award for “Most Excellent Improvised Dance”. His other activities have included: a mask dance-drama for Himalayan religious ceremonies, collaborations and theatrical presentations with, among others, Finnish avant garde drummer Edward Vesala and American poet Allen Ginsberg; appearances at Rainbow 2000 techno festival in Japan, Juksan International Arts Festival in Korea and on television on the Kyoto Satellite Channel, Asian Performing Arts Now in Japan with dancer Edwin Lung, and with the Korean company Paekche under Professor Sung-Sik Chang.

Pianist, vocalist, educator and artist Aya Ogawa lives in Hakodate, Hokkaido. She started playing piano in 1968 and has been involved in theatre since 1970. Ogawa is also a songwriter, organiser of poetry readings and publisher of picture books. These experiences inform her improvisations, which include work with Japanese and international musicians and dancers such as Sabu Toyozumi, Peter Brötzmann and Deku Ogawa, and Butoh dancers Hal Tanaka, Mushimaru Fujieda, Atsushi Takenouchi and Tukasa Kamidate.

They use improvisation as working method to create sonic stories and worlds, drenched in incredulity at their own existence. Plethora of instruments, found sounds and moving images allow them to layer contrasting sounds to create haunting and mesmerising soundscapes. Bells chime, bows scrape, moans and groans weave in and out, found and synthesized sounds intermittently warm the pieces sonically while their collaboration with VJ add visual dimension to their intriguing performances. They explore the outer boundaries of sound, pushing it to the limits of what can be considered acceptable in the realm of so called music. Their compositions are created in real time, though sometimes time as well as good taste and other senses maybe suspended. In 2015 and 2017 Shepherds of Cats toured Germany and UK to play concerts in places such as at Kreuzung an St. Helena for In Situ Art Society in Bonn, Das Gespinst in Essen, MK Gallery in Milton Keyens, The Kazimier Gardens in Liverpool. They collaborate closely with Manchester-dwelling saxophone swinger and Tombed Vision Records headmaster David McLean, German trombonist Gunter Heinz, Japanese pianist Aya Ogawa, composer and Lisbon base experimentalist Pascal Ansell AKA Panelak. Maciej Piątekaka VJ Pietrushka, experimental live video maker.  In collaboration with their Japanese and Polish friends they created Butoh–Techno spectacle.

Composer and saxophone player from Wroclaw, Poland. She is a regular to the Jazz scene in her hometown as well as London, where she participated in projects such as London Improvisers Orchestra, Skronk and Exploratorio. Matylda also spearheads two musical projects in London, which focus on mixing compositions with free-jazz improvisations. In 2015, Matylda played at the esteemed Jazztopad Festival in her native city after which she was featured in the music portal All About Jazz. Establishing her career with the band Kolega Doriana, the group released an album in 2015 to positive reviews from The Free Jazz Collective as well as Redbull Tour de Polonia.

Video artist working mainly on experimental video projects & short films but also collaborating with various local and international musicians, exploring closely improvised and electronic scene. His films has been screened & exhibited both in places such as: Art Gallery of SESI-SP in Sao Paulo, Babylon Cinema in Berlin and ICA in London, Arnolfini in Bristol, The Vienna Kunstlerhaus and The Embros Theatre in Athens.  VJ Pietrushka shared the stage with artists such as Isnaj Dui and Ben Nigel Potts performing fully improvised live VJ sessions and closely collaborate with Shepherds of Cats.