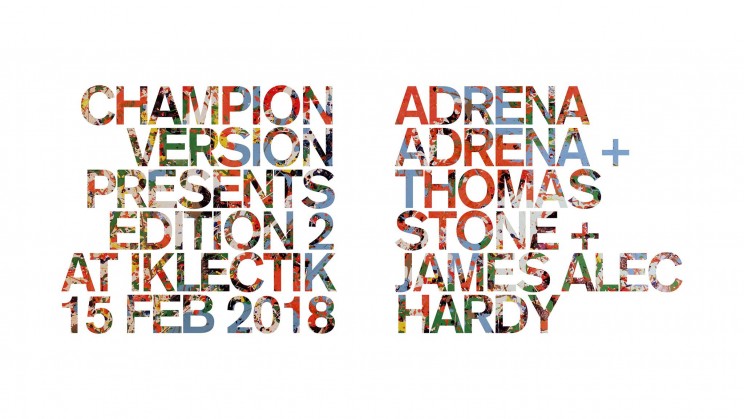 There will be a 7″ featuring music by the performing artists that will be limited to 5 individually numbered copies total. They will be given away via random draw and will only be available at this event.

Adrena Adrena
Adrena Adrena is a collaboration between visual artist Daisy Dickinson and drummer E-Da Kazuhisa, previously the drummer of the Japanese noise band Boredoms (WEA Japan, Reprise/Warner Brothers) and currently British electronic/post-rock band Seefeel (Rephlex, Warp Records). The duo cut a raw blend of drums, noise and organic visual work, featuring in their performances an eight foot white sphere that hangs above Kazuhisa’s drum kit and which Dickinson maps videos on to; her work was described by William Barns-Graham of Fluid Radio as ‘cosmological and transcendental, drawing attention to the wonder of the earth and our sensuality on it’. As a duo, their debut was at the International Festival of Projections in early 2016 and have since performed at End of The Road Festival, Supernormal Festival, Fort Process Festival, Splice Festival, Zorofest in Leipzig and other shows across the UK and Europe, with Acid Mothers Temple and members of Wire and Bo Ningen. The pair completed a short film in 2016. ‘Man on the Hill’, which features E-da playing drums on fire in the mountains. The film has since been featured on the British Council Film website and in 2016 was nominated for The BFI London Film Festival, Encounters Short Film and Animation Festival, BAFTA qualifying Aesthetica Film Festival, The London Experimental Festival, Vienna Independent Short Film Festival and the London Short Film Festival.
adrenaadrena.com
youtu.be/DZ3O3ayoCbQ

Thomas Stone
Winner of 2015 NonClassical Records BOTB, Thomas Stone creates his immersive music using contrabassoon, samplers, loop pedals and activated percussion. Blurring the boundaries between electronic and acoustic sound production the music explores themes of ritual and presence. An enforced simplicity runs throughout the dreamlike sound world conjured from slowly evolving motifs using the lowest and highest notes possible on the contra’ accompanied by a hiss and murmur from the percussion and pulse driven samples breaking to moments of fragile beauty.
thomasstonemusic.com
youtu.be/3P2RAoh6xMM

James Alec Hardy
Represented by London’s Kristin Hjellegjerde Gallery, James Alec Hardy creates feedback systems as a means for negotiating ideas and simplifying complexity, which are manifested by using obsolete analogue video and audio. Sceptical of the ways in which new technology lends itself to the entrapment of minds using specialised propaganda and manipulated suggestion, Hardy creates work that subverts and repurposes old technology. Using obsolete analogue equipment, arrays of monitors are symbolic motifs, simple tribal shapes are interrupted and reconstructed, and video sequences are performative, produced by the physical manipulation of machines. Video acts as a physical and sculptural object rather than a virtual electronic portrayal of image and sound. Immediate and sensitive, it conveys his ideas directly in our age of high video literacy, functioning as the meditative stage for the mind and unravelling its own truth by suggesting that truth and narrative are, ultimately, subjective. Recent solo exhibitions include Some Things are Clearer in The Dark at Kristin Hjellegjerde Gallery (2017), Totems of the Eclipse Maximum, Artmoor House, London (2017), Modular 1304, ArtMoorHouse, London (2013), Trapped in the Machine, The Hospital Club, London (2013), and Decadia Broadcast System, Home Front, London (2012), while group exhibitions include Asemic, Kristin Hjellegjerde Gallery (2015), No Alarms and No Surprises, Ritter/Zamet, London (2015), Mackerel Sky, Whitechapel, London (2015), Oscillate Wildly, South Kiosk, London (2014), and James Alec Hardy Dominic Beattie, The Depot Gallery, London (2013). Hardy lives and works in London.
sitbackandrelapse.com