Corpora Aliena is pleased to present a concert of experimental music based on the theme of ‘Collaboration and Creatiivity.

Using as a starting point Brian Eno’s concept of ‘scenious’ or collective intelligence, the concert will feature musicians and producers who have developed projects using a collaborative approach. Featured artists include Steph Horak and Liz Helman, who will perform a new collaborative work; Bernhard Living will present his digitally-based composition ‘Violin Stories’, made in collaboration with the Serbian musician Manja Ristić,  with video by the Russian video artist Elvira Zhagun; and the duo Gardner and Salnikov will perform a dark ambient multimedia set using a wide range of devices including circuit bent DIY machines and video projection of contemplative imagery, CGI creatures and landscapes. In addition to the live performances, there will be a screening of ‘Eight Bedtime Stories’ by the Belgian duo Kraken (Joris Vermost and Ricardo Gomez), and guest-curated by the Moscow-based Dasha Birukova. Also included in the concert is the the London-based French musician Lola de la Mata, who will be performing with a mix of voice, violin, live electronics.

The concert is an exciting opportunity to see and hear some of the leading musicians and artists who are working at the cutting-edge, and who are part of today’s experimental music and contemporary arts scene. 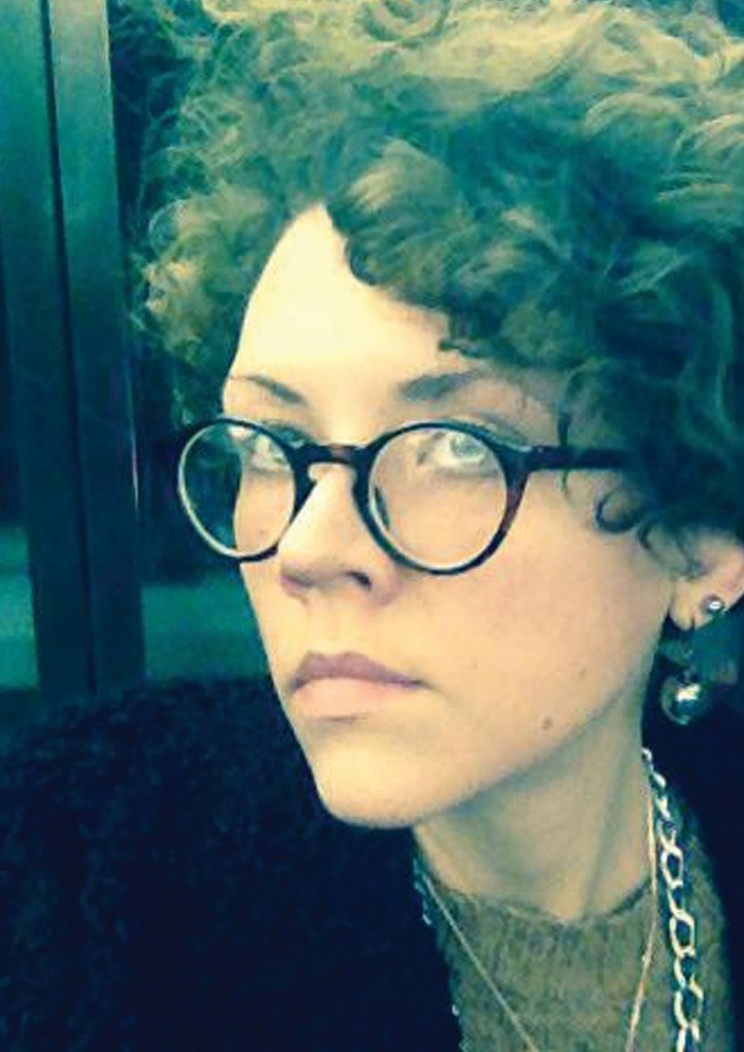 Currently Birukova is a lecturer at The Russian State University for the Humanities, Moscow, Russia, Department of the art history and at the British Higher School of Art and Design, Moscow 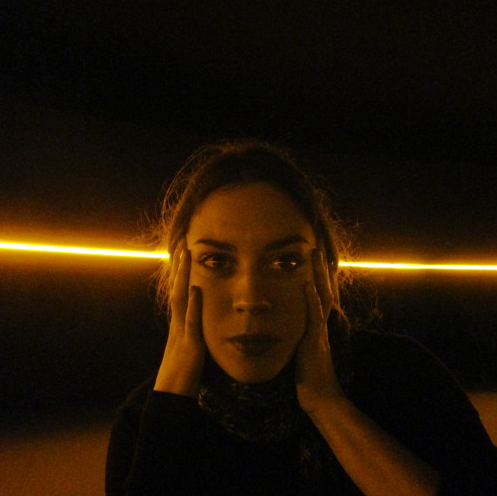 Lola de la Mata (b.1991) is a London based artist, musician, and composer whose practice focuses around the body, collaboration and listening. Lola’s work ranges from monotypes and graphic scores, to installations and compositions for movement, voice, electronics and classical instruments.

She had an installation and a sound piece included in the First Engine Room Sound Art exhibition in February 2016, and later that year received an award for her composition Katinka, commissioned by the Tre Vocci Ensemble.

She has worked with dance companies and dance artists in Basel, Paris, Jersey, London, and New York. Most recently she performed with a dance group at Bow Arts in London, and at the Jersey Opera House.

De la Mata is the organiser behind the interdisciplinary artist group ‘Parallel Praxis’, which seeks to support and develop process and individual practice, to provide a wider network, and promote collaboration.

She had an album release on April 22nd, 2018, with Chicago net label- Pan y Rosas Discos.

The Belgian duo of audiovisual artists Kraken (Joris Vermost, 1971, and Ricardo Gomez, 1972) create dream-like and sometimes nightmarish videos using both original and found materials that are presented out of context. They are interested in obsessively projecting an inner nature of fear, morbid corporeality, lost in the white space of snow deserts, and with a misanthropic perception of  humanity. These images have a direct connection to their industrial noise and ambient music  – and it is the aim of the artists to evoke a feeling of estrangement from reality, which in turn is transformed by their films into a nonexistent space.

Their video “Eight bedtime stories” illustrates bad dreams and nightmares, creating a sense of anxiety from the loss of stability and lake of sureness of the reality of the present. Does this present exist, is the future possible when you’re not sure of your own existence?

Kraken are currently signed on the German Raubbau label – and have been making electronica/soundscapes since the late eighties always in synergy with  photography and moving images. 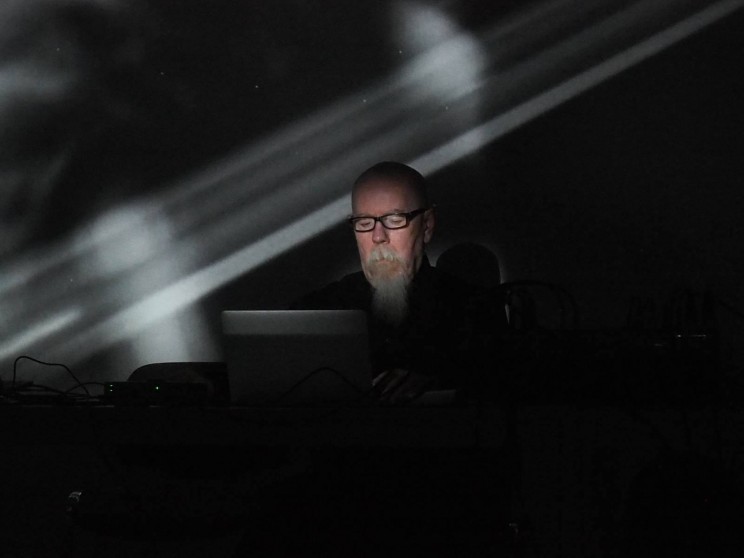 Bernhard Living (b. 1948) is an experimental music composer, curator and former multi-instrumentalist (playing alto saxophone, bass clarinet snd flute). He was born in Ely, Cambridgeshire, England – and lives and works in London and Southampton, England. He studied composition with the South African-born composer professor Stanley Glasser at Goldsmiths College, University of London, and philosophy under professors Jonathan Reé and Peter Dews at Middlesex University, London.

In the role of curator (1993 – 2000), Living was influential in setting up the BN1 project, a Brighton-based autonomous arts organisation. Described as a ‘museum without walls’, BN1 commissioned leading digital and installation artists, including Susan Collins, Tessa Elliott, Anna Heinrich & Leon Palmer, Thomas Köner, Simon Poulter, Michael Petry and Paul Sermon, to produce artworks for both traditional exhibition spaces and for the pubic domain. He has been an active advocate of digital technology, and within this role he has sat on a number of advisory boards, including the Arts Council of England and South East Arts, to help shape policy within the arts and their relationship to new media.

In 2017, Living established a new curatorial project, Corpora Aliena. The aims of the projects are to; to present live experimental music events, film screenings and gallery-based projects; to work with artists from the international community – and to develop ‘creative conduits’ between London and other European cities; to create opportunities for young and emerging composers, musicians, artists and experimental film makers; and to ensure that there is a positive  gender balance – and to have a high proportion of female composers and musicians taking part in all of Corpora Aliena’s events.

Bernhard Living’s complete musical output can be found at Bandcamp 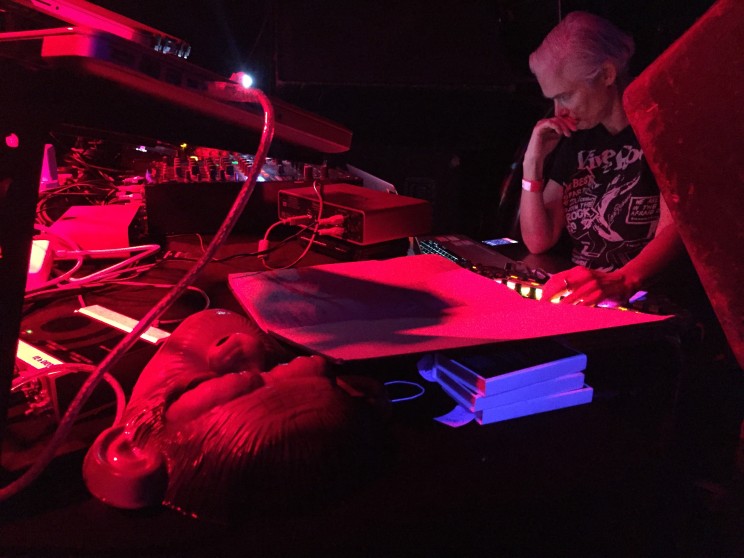 Liz Helman (b. 1961) was born in London, England, where  she continues to live and work. She is self-taught and with no formal training as a composer.

As a multi-disciplinary artist, Helman has always had an interest in ambient music and sound art as a form of expression. Her work, both visual and sonic, is a response to place and environment. Sensitive to how these energies make her feel, she is interested in the subliminal and sonic exploration of these experiences.  By walking the streets, and experiencing different levels of sounds, layers and textures she always begins her process with field recordings before studio intervention. She very much likes working experimentally, following the thread of the sound to its ultimate destination, which she likes to think of as sonic alchemy.

Independent curation projects include Facing You, a photography exhibition for Fringe! – Gay Film Festival, 2012; Roma London in 2010; Before.After.Now – Visions of Iraq – a show on Iraqi Art Deluxe Gallery, Hoxton, London 2003. And under the banner of [noplaceprojects*], the exhibitions RePlace in 2009 and no place in 2008. She also has appeared as an Andy Warhol in Yason Banal’s installation piece, Last Warhol Stand Inn at Tate Modern’s 10th Anniversary Festival of Independents in 2010. 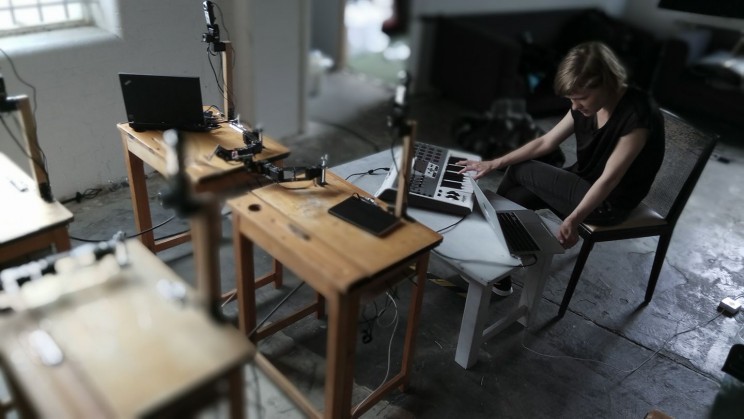 Steph Horak is a sound and video artist. As a vocalist/producer she experiments with different systems for voice and composition, whether through the use of self-programmed systems, or combinations of hardware and electronic instruments built by friends. These experiments can be found under the moniker SheIsRevolting. Stylistically they edge somewhere between experimental electronica, traditional songwriting, and conceptual pieces. Recent sound projects include threehundredandsixtysix, where Horak sings a note a day for a year. These recordings are available on the Fractal Meat Cuts cassette label here: https://fractalmeat.bandcamp.com/album/threehundredandsixtysix and as a digital download here: https://sheisrevolting.bandcamp.com/releases.

Through her video installations Horak reframes mundane and common experiences in hypnotic settings, such as in Commutations I and II which are explorations of the urban environment and transportation systems in London comprised of some 70 videos filmed out of bus (Commutations I) and train (Commutations II) windows. The films are presented in triptych on loop with soundtracks in part comprised from the videos native sound.

Her photographic series Manscapes is a reflection of the traces of man in the seemingly barren landscapes of Iceland. She conducts ongoing light experiments for her Still Life series.

Horak has worked in the field of contemporary electro-acoustic and academic music, project management and exhibition production. She has produced exhibitions for artist Patrick Tresset at Pompidou Centre, (Paris), Merge Festival (with Tate Modern), and Ars Electronica (Linz). She produced the 14th International Conference on New Interfaces for Musical Expression, the Creative Machine Exhibition. As a community arts practitioner she worked with seldom-heard and hard to reach groups across London in therapeutic music, art, and social contexts. 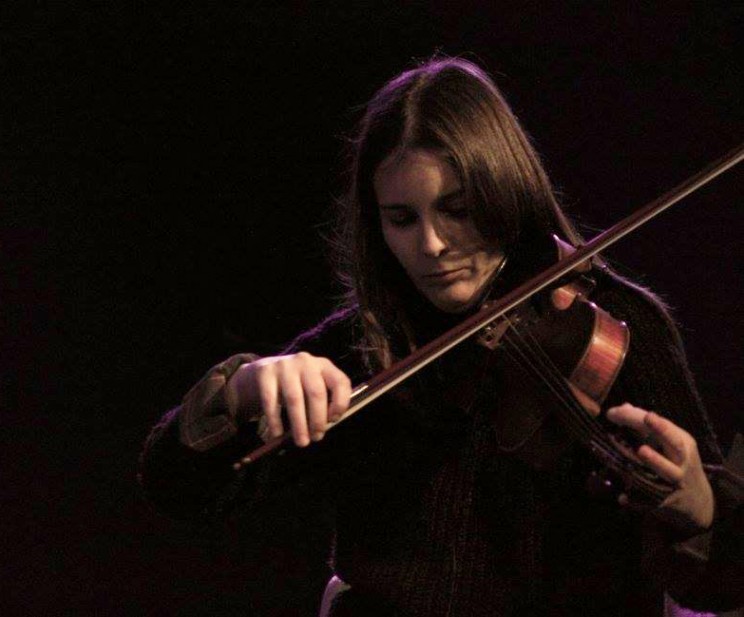 Manja Ristić (B. 1979 Serbia), is a multimedia artist – violinist, improv performer, sound artist, curator, published poet, researcher, educator and cultural manager. She graduated at the Faculty of Music Art, Belgrade (2001), then in 2004 finished PGDip at the Royal College of Music in London (RCM).

As a solo and chamber musician of classical repertoire she performed throughout Europe collaborating with renewed mentors, conductors and performers. After postgraduate studies she turned toward multimedia performance researching in the field of instrumental electro-acoustics, sound art, conceptual music, AV installation, applied music, experimental theatre etc.

She is co-founder of the Association of Multimedia Artists AUROP 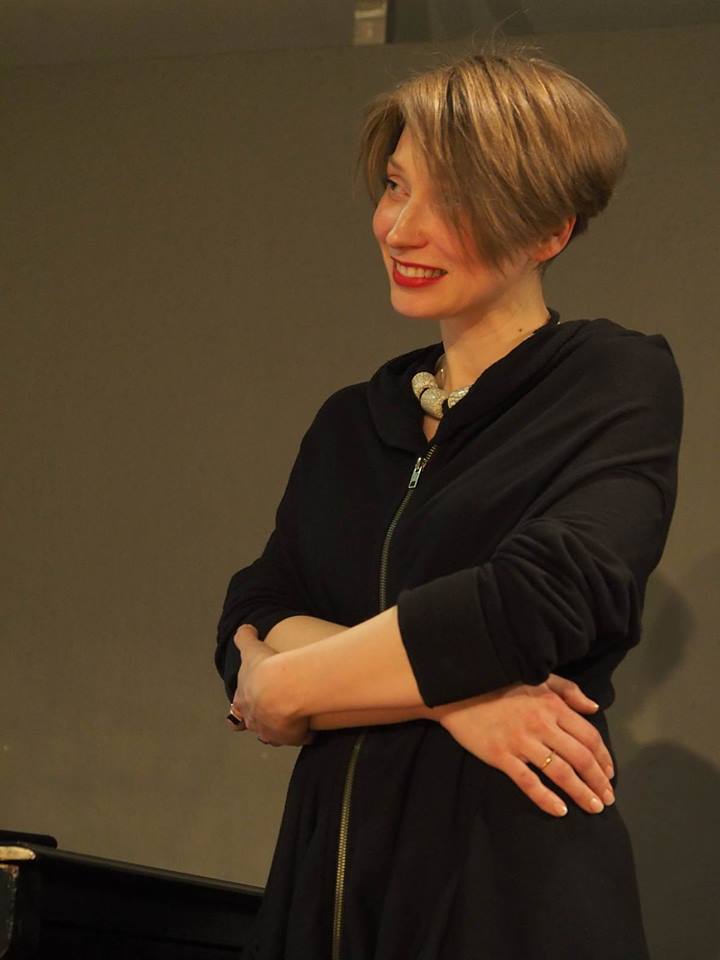 She graduated from the Faculty of Art History at the Russian State University for the Humanities, the postgraduate student of the Russian State University for the Humanities in the direction of “Cinema, TV and other screen arts”, the author of more than 20 “Artification” video works created in the context of glitch aesthetics (Rhizomatique publishing, Frankfurt am Main, 2010 ), a video work for the album “SILF”, (NOSTRESS NETLABEL, 2011); video-work “Ready-media of Duchamp”, 2012; 05/16/2016 – video work in a duet with Pavel Zhagun.

18.10.2013 – presentation of the report “The Mistake as a Formative Strategy in Contemporary Art” at the International Symposium of Media Culture PRO & CONTRA.

15..11.2013 – lecture at the Media Poetry Lab on the theme “The history of glitch art in the visual field of modern technology, the context and development of this direction.”

06.012015 – presentation of the report “Glitch art and its interaction with mass culture” at the 13th Interuniversity Scientific Conference “Visual Studies / Visual Research: Interdisciplinary Perspectives on the Study of Visual Arts”. 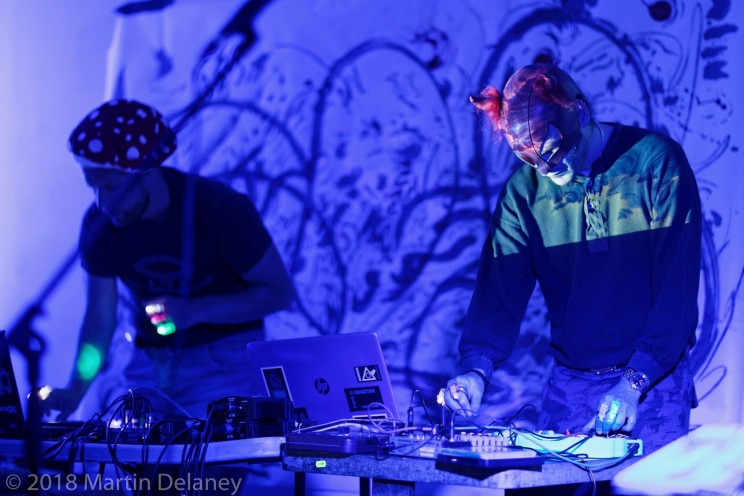 Howard Gardner (b. 1979 Britain) and Misha”MOX” Salnikov (b. 1974 Russia) got to know each other via mrs vee label, where the albums of their projects have been released. Gardner is responsible for industrial outfit Non-Bio, whilst Salnikov has been creating quite different music with as/with MOX Salnikov, Poostosh, QUTH and Tooth Kink. Together they improvise with a wide range of devices (including circuit bent DIY machines) and edited to produce the finished product. The main genres are dark ambient, dub, musique concrete, industrial, noise etc. For the live performances they use the combination of Salnikov’s contemplative footage with Howard’s CGI creatures and landscapes.