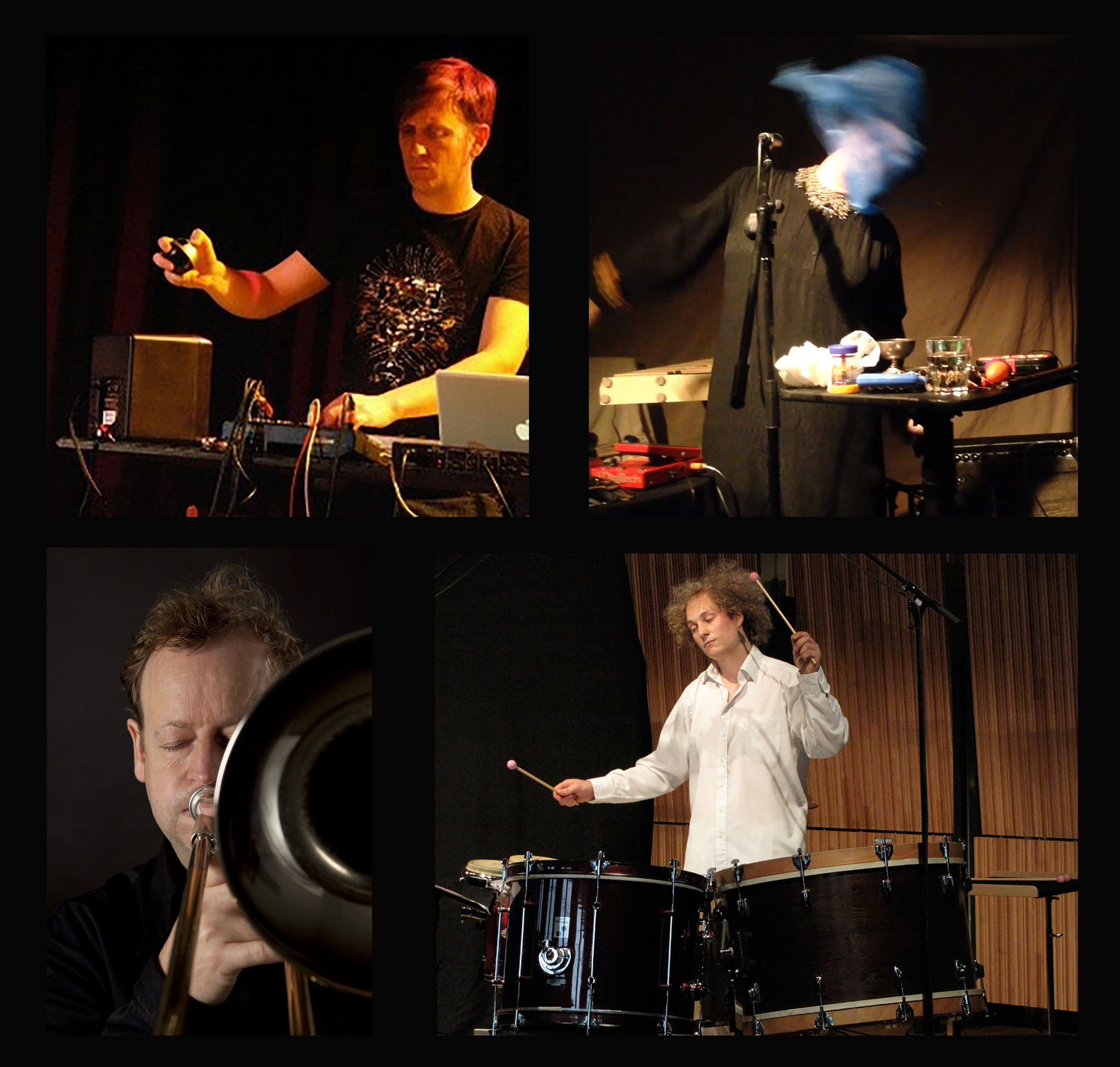 Form to Freedom and the Mystery of Measured Tones is a concert of improvised and composed music, bringing together four unique performers in a program of intimate sets. It highlights improvisation as a means of composition, and explores collaboration as a process of offering and sharing creative visions. Featuring Sharon Gal – Voice, Electronics; Guy Harries – Voice, Flute, Electronics; Hilary Jeffery – Trombone; and Serge Vuille – Percussion.

SHARON GAL is an interdisciplinary artist, performer, experimental vocalist and composer, with particular experience of free improvisation and collaborative group compositions.
Her work relates to sound, architecture, live performance and participatory art, exploring the psychology of sound and its relationship with space.

She also directs a series of participatory compositions/performances, examining the inter-relations between people and place. These pieces are site specific; evolving collaboratively and inviting participation from the public. They offer artistic engagement, play, and creative exchange, as a means to learning and bringing together, presenting a democratic space and collective ownership. L’esprit d’escalier – for voices in a staircase, Toy Orchestra – for children and adults, Room to Breathe – with balloons & music, Long Drone – for a large ensemble of various instruments, Gals with Guitars – for female guitar players, and Sound Out – for a large group of voices in a public space.

GUY HARRIES is a composer/performer based in London. He performs with voice, electronics, and wind instruments, and is involved in projects ranging from garage rock to chamber opera, from sound art to electro art pop to multimedia musicals.

His compositions have been performed by contemporary ensembles such as: The Tate Ensemble, SOIL, The Roentgen Connection, Vocal Lab and LOOS, and have been broadcast and performed internationally. In 2000 he was awarded the Henriette Bosmans prize by the Association of Dutch Composers (GeNeCo).

He is also a singer-songwriter, practising electronic troubadourism with his laptop and voice. Currently he is working on a new project about Alan Turing.

Guy collaborated with musician Meira Asher, with whom he co-founded the Bodylab Arts Foundation. He was also a long-time core member of the POW Ensemble based in the Hague.

In 2012 he founded the Live Hazard collective with illustrator Valerie Pezeron. The collective explores the interdisciplinary links between drawing and sonic performance, and has organised a number of large-scale events in the UK, linking visual artists and musicians in a live performance context.

HILARY JEFFERY is a self-proclaimed ‘desert trombonist’ and composer, born in Surbiton, England in 1971. A central and sustaining influence on his music is a sense of ‘silent space’, which he first experienced in the Sahara Desert in the 1990s. Hilary aims to share this experience, creating inner-spaces for listeners and fellow musicians to explore via the medium of his ensemble Lysn. He studied at Dartington College of Arts, University of York, European Dance Development Centre Arnhem, Netherlands Royal Conservatory, and has worked for more than twenty years as a musician playing in many different styles and areas of music including rock, techno, electronica, jazz, pop, afrobeat, contemporary classical and free improvisation.

SERGE VUILLE is a Swiss freelance percussionist established in London. He founded and directs We Spoke : New Music Company, which has been performing in Switzerland and internationally since 2008. He plays with many ensembles including the BBC Symphony Orchestra, London Sinfonietta, London Philharmonic Orchestra, London Contemporary Orchestra, Collegium Novum Zurich, Nouvel Ensemble Contemporain or Usinesonore Festival. Serge also regularly performs as a soloist in recitals or as part of new music ensemble programmes including performances at Huddersfield Contemporary Music Festival, Kings Place and the Royal Albert Hall in London, Musikpodium in Zürich, SMC in Lausanne, Musik Festival in Bern. He also plays baroque timpani with the Orchestra of the Age of Enlightenment and Music for Awhile, drums with the Martin Creed Band and co-curates the contemporary series Kammer Klang in London.

As a committed and creative musician, Serge has premiered many solo and ensemble works and often collaborates with composers or artists to create new pieces and artworks. He composes soundtracks for arthouse films as well as concert music. He was recently commissioned to create a piece for the 100th anniversary of Le Corbusier’s first house in La Chaux-de-Fonds, Switzerland.

Graduating with distinction from the Royal College of Music and the Conservatoire Neuchâtelois, Serge was awarded many distinctions, scholarships and prizes including the 3rd prize at the prestigious Nicati Competition for contemporary music in Switzerland in 2011.

Serge is a professor at the Royal College of Music in London where he coaches the RCM percussion ensemble and lectures in experimental music.