Four recent pieces will be performed by musicians drawn from the London experimental music scene as well as students and members of the Audio Research Cluster at UCA Farnham. The Farnham concert will be streamed live.

Solo: a little story (2016-2020)  Little acoustic stories developed through my listening to the world and collecting noises.

Breath (2019) The soft sound of breathing unfolds, spreads, travels and mixes with the wind.

Floating moment (2019) A moment in time is narrated through a precise written descripton of sonic and visual events, thus becoming a score that can be reproduced in musical form.

Approchoaches and Departure – Appearance and Disappearances (Pauline Oliveros 1994) the score provides each performer with a strategy for approaching or departing from a pitch of his or her own chosing. 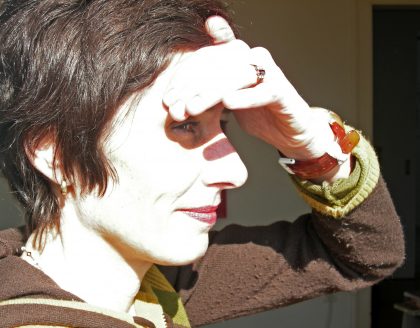 “I deeply believe that there is an individual beauty that can be discovered in the deep listening of sound.”

Essentially her works is inspired by breath, deep listening and the constantly changing pulsations of life. She is searching for sound in nature and, having dealt with microscopic noise structures for years, she has found ways to transform them into pictorial soundscapes and audible sounds. The performance of her compositions is often brought back to a natural environment in a subtle and often imperceptible blending of ambient and composed sounds.

James E Armstrong is a composer, musician, mastering engineer and Rusted Tones Recordings label owner. He is a Lecturer in Music at UCA Farnham specialising in mixing.  His background includes experimental music, and research into acoustics and psychology https://rustedtonerecordings.com/about/

Gabrielle HB is a sound artist from Montreal, Canada, currently completing an MA in Sound Arts at University of the Arts in London. She sings, plays synthesizers, uses field recording, improvises on stage as well as writes text scores and composes for contemporary musicians and dancers. She holds a postgraduate diploma in Digital Music from Université de Montréal.   gabriellehb.com

Petri Huurinainen is a Finnish artist and musician currently living in London whose practice include field recordings, extended use of live electronics, improvisation, live soundtracks, film music, composing and music production. His limited edition 12″ vinyl record ‘Exile Nothing’ came out in 2016 and is available from Rough Trade. http://www.phuurinainen.com/

Artur Vidal is a Spanish-born saxophone player who grew up in Paris where he studied music and history of art. Currently, in London, he is doing research on improvised music and practices composer Pauline Oliveros’ Sonic Meditations. www.arturvidal.com

Emmanuelle Waeckerlé is a London based multidisciplinary artist, performer and free improviser working with the materiality and musicality of language. Her practice emerges between image text and performance, between poetic scores and occasions for their activation (installations, performances, workshops).  Her scores and music are distributed by Edition Wandelweiser Records. She is a Reader at UCA Farnham, director of bookRoom research and publishing platform and the  host of the house concert series Cosy Nook since 2016.

Harry Whalley leads the BA/BSc (Hons) Music Composition & Technology course at UCA Farnham and is an award-winning composer of contemporary classical, film and electroacoustic music.  Harry’s works have been performed around the world and on BBC Radio 3 by music groups such as the Hebrides Ensemble, Artisan Trio, Red Note Ensemble, Vancouver Miniaturists Ensemble, Gildas Quartet, Edinburgh Quartet, Ron Davis and many others.  https://www.harrywhalley.com

Yifeat Ziv is an experimental vocalist and composer, evolving in between free-improvisation, contemporary new music, jazz and sound art. She is the co-founder of experimental vocal quartet ABRA Ensemble and vocal jazz trio The Hazelnuts with whom she has released four albums and performed worldwide including Marseille Jazz des Cinqs Continents (FR), Tri-C Jazz (US), Safaricom Jazz (KE), Filter4Voices (CH) and Red Sea Jazz (IL). She is a current recipient of the Siday Fellowship for Musical Creativity.  www.yifeatziv.com

The here.here concert series, is a collaboration between bookRoom and the Audio ResearchCluster at UCA Farnham, curated by Emmanuelle Waeckerle and Harry Whalley, around their common research in extended, textual, visual, gestural and object scores and ways to integrate or experience technology in text/music/film/performances.

The project is supported by UCA research fund.