Introspective Sonics | Side B

Introspective Sonics is a two part event series focusing on the vital affinity between individual creativity and the collaborative aspect of free improvisation.

Side B sounds with a duo performance of John Richards and Oliver Torr and a quartet consisting of Yifeat Ziv, Doran Edwards, Kyrin Chen and Joseph Johnson joined by live drawing of Iris Chun-Tzu Chang.

Something, anything, nothing or everything can happen. 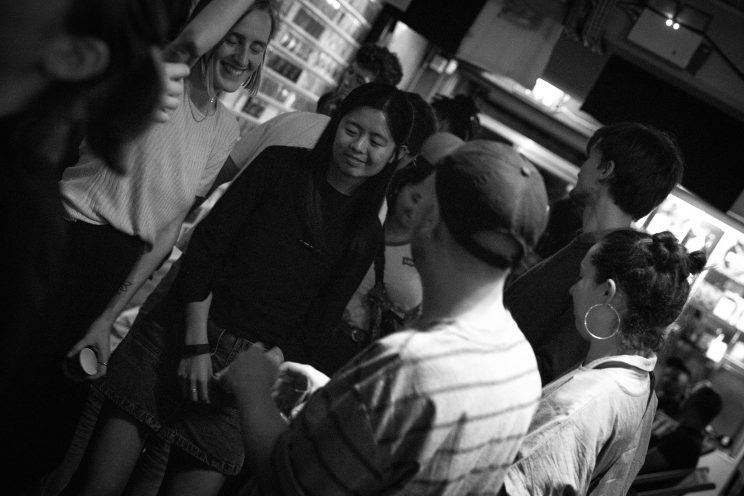 John Richards explores the idea of Dirty Electronics that focuses on shared experiences, ritual, gesture, touch and social interaction. In Dirty Electronics process and performance are inseparably bound. The ‘performance’ begins on the workbench devising instruments and is extended onto the stage through playing and exploring these instruments. The Dirty Electronics Ensemble is a large group that explore these ideas and whose members are often made-up of workshop participants. The workshop is central to the Ensemble in that all of the musicians have to build their own instrument for performance. The group has performed pieces specially written for the Ensemble by, amongst others, Japanese noise artists Merzbow, Pauline Oliveros, Howard Skempton (founder member of the Scratch Orchestra), Gabriel Prokofiev, Anna Meredith and Nicholas Bullen (ex-Napalm Death and Scorn). Other notable collaborations include working with Rolf Gehlhaar (original Stockhausen group), Chris Carter from Throbbing Gristle, Keith Rowe, Anat Ben- David (Chicks on Speed), Kei Miyata (Karas/Teshigawara) and STEIM (Amsterdam). https://www.dirtyelectronics.org/ 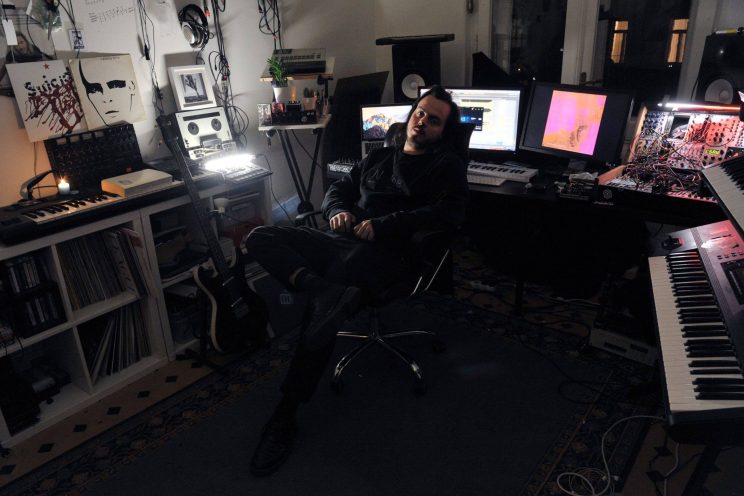 Oliver Torr is a multi-media artist and co-founder of audiovisual art collective and label XYZ project that has been active since 2014, mainly in Prague, but also in London and Berlin where Oliver studied audiovisual art at the Berliner Technische Kunsthochschule. The studies were a backdrop for a more important journey in sound, working at Berlin’s Patch Point, led by musician and synth builder Darrin Wiener, who taught Oliver how to build Serge and Ciat Lonbarde instruments. Oliver has been increasingly active on the Czech scene, having strong ties with the local club Ankali, releasing music of his friends on his XYZ imprint, playing live performances and DJ sets. His audiovisual work has also been present at gallery and art events such as Berlin’s Funkhaus, Superbooth, Prague Quadrennial, Lunchmeat Festival, White Pearl Gallery, Chemistry Gallery, 71 Ashfield Road London, Ost Club Berlin, Spectaculare Festival and many others. Some of the companies that commissioned Oliver’s work include Ableton, Native Instruments, Goethe Institut, Tech Open Air and others. He also organises various events ranging from workshops, listening sessions and warehouse parties and currently works at Prague’s Noise Kitchen, with influential sound designer, composer and professor Martin Ozvold and the Bastl Instruments collective. Some of his recent successes were the completion of a large scale installation at Pragues prestigious Quadrennial, where he was chosen to collaborate with accomplished English composer John Richards (Dirty Electronics). 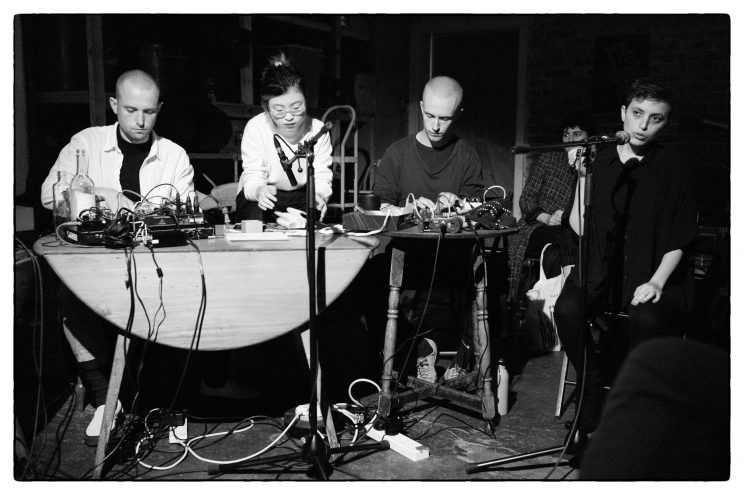 Ziv/Chen/Edwards/Johnson quartet is a free-improvisation group exploring the possibilities of singularity and in-betweenness through voice, feedback systems, material tension and present moment awareness. By allowing ‘silence’ to be one of the essential elements that each group member can bring to the real-time composition, each moment rests within expectation and absence, emergence and impermanence, being and doing, friendship and other, memory and existence-time…

Developed at the London College of Communication’s (UAL) Sound Arts department as part of a workshop run by Prof. David Toop in 2019, the group has already performed in some of London’s most renowned venues for experimental music, including Cafe OTO and Hundred Years Gallery.

The group will be joined by artist Iris Chun-Tzu Chang performing an adaptation of her Synesthesia Series: an ongoing project (since 2015) that tries to capture the synesthetic moment of image and sound through performative writing, improvisation and illustration. In this live drawing session, performance will be seen as an experiment to externalize the process of inner sensory translation.

Yifeat Ziv is a London-based vocalist and composer, evolving in between free improvisation, contemporary new music, jazz and sound art. Her recent sound works were presented in spaces such as the Hundred Years Gallery, London, the Israeli Center for Digital Art and Design Museum (IL), and her solo performance was performed in venues and festivals such as NoizeMaschin!! London, and Tmuna Theatre (IL). She has worked and performed with a wide variety of artists and ensembles, including David Toop (UK), the William Parker Orchestra (US), London Experimental Ensemble (UK) and The Revolution Orchestra (IL). She is also the co-founder of vocal ensembles The Hazelnuts and ABRA Ensemble with whom she has released four albums and performed worldwide. Yifeat is a recipient of the Siday Fellowship for Musical Creativity and the AER Art for the Environment award. https://www.yifeatziv.com

Doran Edwards is an artist and musician from North East London specialising in sound based installation, improvised performance and group free-improvisation.

Working as a composer and performer for 10 years and after the 2016 release of his final project Weird Dreams second album, Luxury Alone, Doran moved toward expanding his artistic practice with sound at the London College of Communication.

Exploring in present moment awareness using feedback, he seeks to just bewith what is there in each space, object, gesture – in this system, a change to one element, effects a change in all elements. Impermanence, totality and emptiness are found in between tones where attachment is not possible. This awareness and attentiveness of vibrational energy within these conditions allows for the possibility of submission; just allowing things to be as-they-are.

Doran has also worked composing and designing sound for contemporary dance with Annie Pui Ling Lok for Castillo Interior(Avila, 2018), photography with Hui Hsien’s Where the Heart Beats(London, 2018) and poetry for Phoebe-Bishop Wright’s Because(London, 2019). He also frequently collaborates with Joseph Johnson continuing the corresponding themes of their individual work.

Joseph Johnson is an artist, musician and dancer originally from Bristol studying Sound Arts & Design at the London College of Communication. Previously working with field recording techniques, he has developed a strong interest in the body and improvisation, and their relationship to sound through direct experience using low cost electronics. Having grown up as a Buddhist, Dharma (‘things-as-they-are’) is at the centre of Joseph’s artistic practice.

‘Music, states of happiness, mythology, faces belaboured by time, certain twilights and certain places try to tell us something, or have said something we should have missed, or

about to say something; this imminence of a revelation which does not occur is, perhaps, the aesthetic phenomenon.’J.L. Borges (2000), Labyrinths. London : Penguin Publishing, p. 222

Kyrin Chen lives and works in London, where they are currently studying Sound Arts at the University of the Arts London.

Working, with drawing, sound, and video, their current practice tests the interstices between opposites, exploring the spaces between belonging and dislocation, intimacy and alienation, the natural and the human body. In the course of searching for alternative modes of communication, Kyrin isolates and recontextualizes familiar sounds, creating new meanings through reconstruction and recomposition. Responding to architectural spaces, Kyrin uses small objects to create quiet, delicately textured sounds. A sense of fragility is further expressed through their drawings and etchings.

Kyrin was a participating artist at Arts Letters & Numbers, NY, “Hinges Mirrors and Eclipses” Festival, 2018. They have recently had a group exhibition in Gallery 46, London and performed at Cafe OTO and Hundred Years Gallery, London. They have performed and collaborated with artists including David Toop, Yifeat Ziv, Doran Edwards, and Joseph Johnson.

Iris Chun-Tzu Chang is an interdisciplinary artist and composer born and raised in Taiwan. With industrial design and architecture background, currently she studies MA Sound Arts in University of the Arts London, United Kingdom.

Sound as clay, she crafts her work through drawing, performative writing, field recording and improvised performance. Experimenting in between tangible/ intangible, audible/ inaudible, conscious/subconscious, her practice explores the themes of memories’ self- propagation, embodied perception, narrative space and imaginary sound — the subtlety of nature and micro world in/outside our bodies. Focusing on the poetic metaphors within intersubjective interaction, the idea of calling and responding, the dialogue of reflection, the conversion between subjective and objective sensory experiences is the concept she attempts to express through artistic practices.