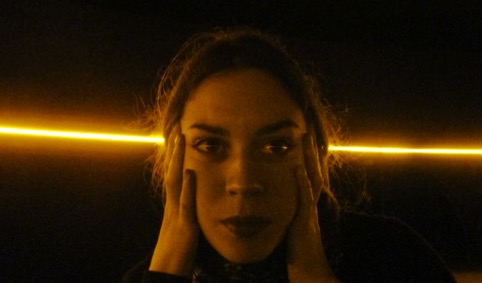 Lola de la Mata gives an insight into her new album, the limiting aspects of the creative industry and breaking boundaries.

Lola is a London based artist, musician, and composer whose practice focuses on the body, collaboration, and listening. Lola’s work ranges from monotypes and graphic scores to installations and compositions for movement, voice electronics, and classical instruments.

You have a very broad range of approaches to medium within your work and the way that materialises into different outcomes. What’s your artistic background and how did you start out?

Lola: I started out in costume, set and textile design. Within those fields you get to rethink spaces, bodies and alter scale. Composing isn’t so different, just you sculpt with sound, and when it’s for a live performance, you sculpt with bodies too.

Do you feel through that experience that you were drawn to an alternative method of working?

Lola: At that point (around 2011) I was finding out the depths of my chronic illness which caused floppy limbs, difficulty staying awake, and led to long periods alone. So when I wasn’t hiding, I had all this drive but always felt like a fraud – like I didn’t really know how to do anything. But composers Luke Deane, Josh Herring and Christine Cornwell involved me in some of their wildly abstract new music projects, and had me singing, playing violin, and devising performance. This woke up an awareness of my body that actually became the crux of my artistic research.

Today I can still feel like a fraud. But maybe this is a way of questioning ones practice, when a lot of us (artists) work in solitary environments. Practice and working methods are about chance, exchange of knowledge and ways of seeing. Not about staying comfortably within a box. It’s about finding methodology in the improvisation…I just play with something until what I was unknowingly searching for reveals itself to me.

Your work challenges the body and human experience, taking intangible motions and channeling them into forms of sensory experience through sound/visuals. What is it about the body that draws you to produce work in this way?

Lola: Each body is unique – by body I mean our own, those of instruments, and that of the space found within architectural form. The bodily themes came about while I conducted research, asking performers, dancers and choreographers questions about their experiences and emotions surrounding their body being curated and composed. What was it like being a living sculpture?

Borrowing this model, I applied it to the academic ‘human experience’ of being a musician, thinking of it as the years of study to impose one’s will on the instrument, to reach and surpass a technical standard. But this is not my experience as a musician, I view it as a collaboration between myself and my instrument. A place where my instrument resonates with my own body, or my body resonates with that of the instrument’s. My scores reflect this desire to unshackle a stiff approach to playing, holding and being with an instrument. I write in order to bring out the voice of the instrument, in a way that isn’t being forced out, and where listening becomes a shared experience of resonating bodies.

Do you see the movements and sounds that you produce to be a form of an extension of the human body?

Lola: Absolutely. I remember when dance artist Rosie Terry Toogood came to see my show at the Engine Room a couple years back, and asked me for some of my music to develop choreography to – she said: “it sounds like it comes from within the body”. This started me on a path collaborating with dancers and dance artists. There is something so raw about improvising with bodies, it’s like going into a parallel space, one where the sound is ringing out the inside of the movements. Like I am transported inside muscle and flesh – totally in tune with the dancer’s breath and energy. There is a lot of vulnerability in improvisation. I find it terrifying and empowering each time I do it. 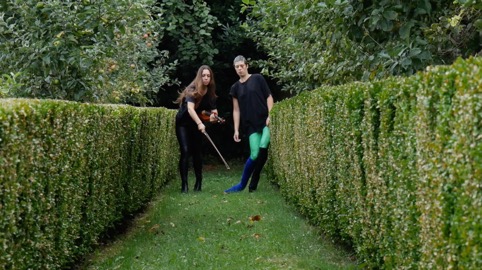 Let’s talk about your album! You just released an album this April, REMISE EN BOUCHE, which translates as palate cleanser; would you say that this is reflective in the sound that you have achieved?

Lola: For me, sound is a means to communicate, where other avenues have failed. The process of making the album, acted as a space where I could say all the things I needed to say that I could not otherwise say or have heard by others. When asked to write this album I was finding the network in London really stale and full of white male gatekeepers.

You asked me about the sound – to be honest, the whole album fluctuates from one track to the other. It just depended on the point I wanted to highlight. Framing my album as a Palate cleanser seemed to fit how I felt as a young women in the improv scene, which was : overlooked. So it’s a sort of joke, in the sense that it is a nothing right? You take a sip of water in-between what you want to say or between what you want to do. That’s how I felt, it’s what a lot of women are trying to talk about, they are in between (…) in the silences. The other translation for Remise en Bouche, is ‘in the mouth’, Heavily hinting at the slow to change perceived place women are allowed to occupy in the music and sound industries.

With my album, I wanted to create sonic worlds where I could better understand my frustration with the music scene, with the art world, my own battles with illness, my lateral way of thinking across artistic disciplines – borrowing from their structures to write titles. It opens with Prelude, which feels more like the ending of a classical piece, but it repeats. It’s simple, loud, spacious, but not quite right. Nothing I make is ever ‘quite right’. My mastering engineer had to endure my stance on barely applying a de-esser on the track remise en bouche, as the unbearable harshness of all the Ss and Hs was the point. The track self portrait, in which you hear a voice saying the same letters in English and French, constantly fights for an identity, and to be heard over feedback- really – just revisits and repeats itself, just like we all do in our life and practices.

I’ve noticed that you are interested in AI and the somewhat complex invisible systems within our society in relation to the role of women. How do you feel as a female artist approaching these issues?

Lola: When you look at what technology has done for women, it has helped get our voices heard. Social media has allowed an oppressed group find other like minded individuals and together have a larger weight and presence. A lot of misogyny and abuse women experience is oppressed by the victim and may never surface. The more women voices we hear from across the world, the more voices join to chant to the systemic failure to love and protect women. The louder we are, the less anyone can deny how our leaders allow a deeply flawed and violent existence for half of the world’s population.

My particular focus has been on the growth of personal assistant bots and AI. If you think about AI, you think about tech, and all of the major male run corporations that dominate our societies. Apple, Google, Amazon have all developed AI personal assistants. Stemming from a capitalist mind, through male workers biases, to a product in everyones hand and home packaged as an attentive (slave) female. You find them on your Phone, Televisions, Cars, Refrigerators, in Airports, at self checkouts… They are everywhere! And they are all created by men.

The problem isn’t that they exist, it’s the fact they have been assigned a (binary) gender, and coded to have very specific character traits which will flirt with you, mock themselves, and make non stop references to food and the home. You should see some of the horrific advertising campaigns from the 1980s for the first office computers, presented as more cost effective than a female employee who just distracts men with her looks and gets pregnant.

Finding this matter urgently needed further discussing, I developed workshops with researcher Cristina Cochior for Antiuniversity (London) and for my cross disciplinary artist group Parallel Praxis. I also gave a performance of my AI research in July with the Young Blood Initiative Artist collective. And, showed a wall installation WE ARE MORE COMPLEX BEINGS THAN YOU COULD EVER DREAM UP, PACKAGE – OR MARKET, YOU WILL NEVER BE ABLE TO REPRODUCE US. Two sound pieces Flatness and Who A(m) I, and three printed for sale signs titled: Stop Capitalising On My Gender, Genderless AI My Ass, Full Time Secretaries and Personal Assistants, USA 2015. 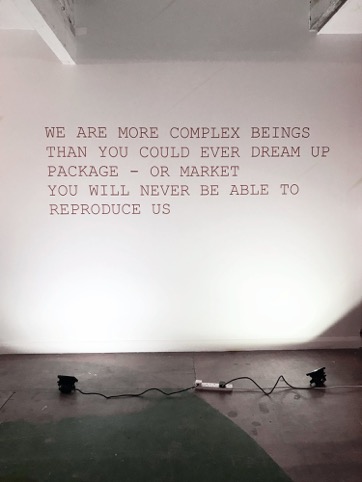 You can download Lola’s Album for free here: http://www.panyrosasdiscos.net/pyr245-lola-de-la-mata-remise-en-bouche/

Lola will be performing in Birmingham in February 2019 at Post-Paradise. You can see more of her work on her website https://www.loladelamata.com and on her Soundcloud