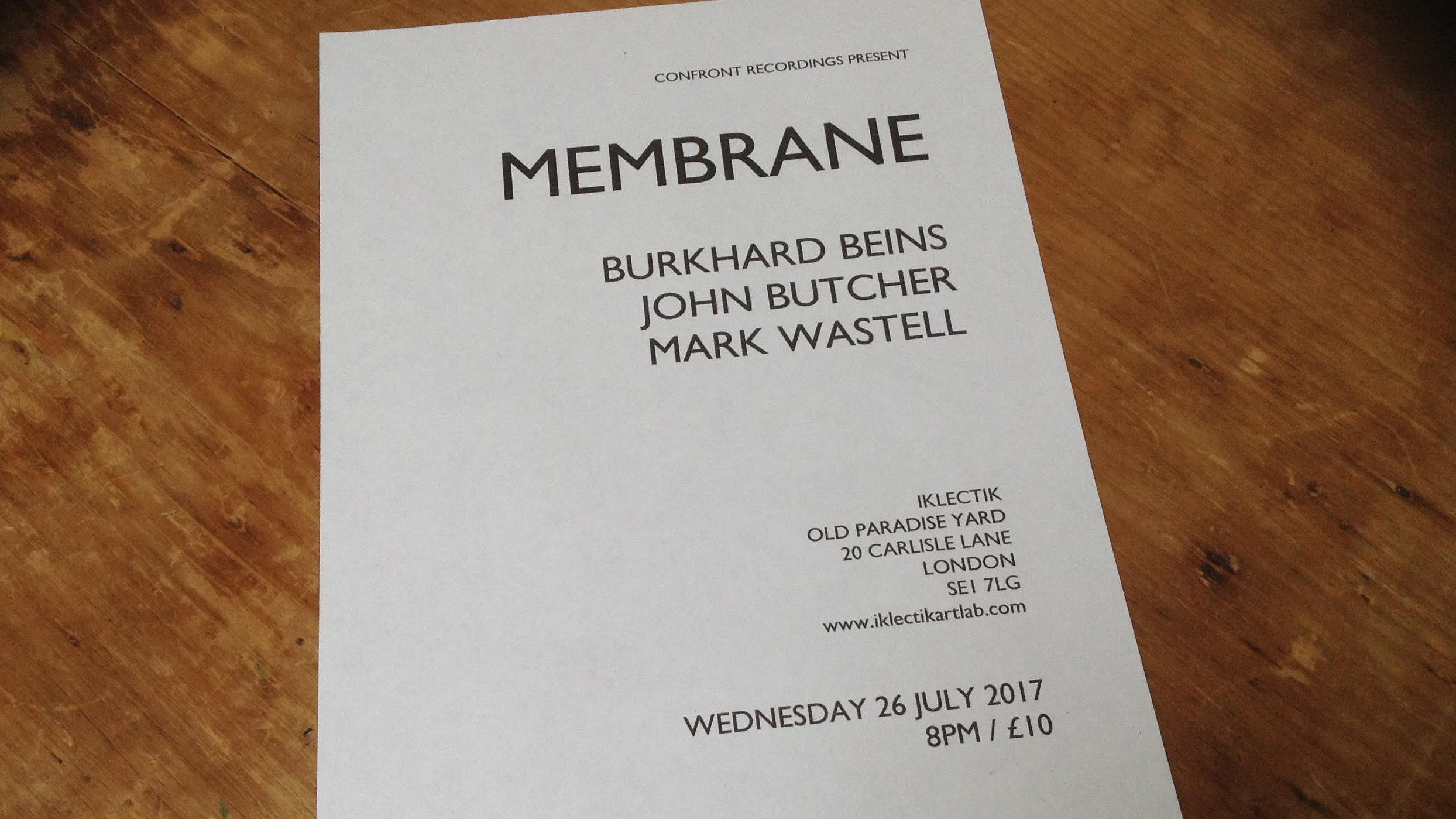 IKLECTIK plays host to Membrane’s second only ever London performance. Their debut in the capital was in 2014 – a recording of which became their self titled release on Confront.

This marvellous release from Mark Wastell’s Confront label documents a meeting of these three heavy hitters convened at Dalston’s Cafe Oto, last March. This was the first time all three had played together, although, as John Eyles remarks in his liner notes, they had all worked with each other, before, in outfits such as Powelchsel (Butcher and Beins), The Sealed Knot (Beins and Wastell) and Chris Burn’s Ensemble (Wastell and Butcher).

This familiarity, combined with rigour and expertise of their respective improvisational methodologies, means this is a very accomplished set. These guys know what they’re doing and so there’s no faffing about. They’re locked in from the first seconds of Membrane 1, setting up a long, ringing sequence of notes, driven by Wastell’s metallic tam-tam murmurs. At first things are slow and sub aqueous, Wastell setting up a liquid sonic field that makes everything like it is taking place at the bottom of a cold, clear ocean.

Butcher comes in sensitively at first, his breathy hisses moving through the shimmer like an eel. At around 11 minutes, he casts forth some simple, abstract phrases, before slipping back into the depths. Beins is even more circumspect and, occasionally, it’s tricky to figure out whether the electronic tones and chain-like rattles that occasionally ripple across the surface of this piece are him or one of the other two. There’s definitely something going on, however, something creating that sense of textured depth that seems, on the whole, organic but sometimes humming like a vast, dormant machine.

At times, Membrane 1 approaches the timeless, womb-like states to which late 90s ambient post-rave comedown music aspired, but rarely achieved. There’s a heavy strangeness and thickness to the sound, which those ambient gurus missed in their layers of synth and whale song. Mind you if I was listening to this piece in a chill out room at 4am after a night of hedonism, I doubt I would be chilling out – rather the opposite, I suspect.

For Membrane 2, things are rugged and earthy rather than glistening and watery. Again, the trio sets up a dense sonic ecosystem, Butcher braying atonally at first, his blasts punctuated by, hollow hisses and underpinned by a tempestuous, glowering tam-tam drone. Wastell keeps up the intensity throughout the first half, his fast, rhythmic beats giving things a stormy momentum as Beins comes in with a whole lot of wiry scratches and fuzz, jostling with Butcher’s hollow, hostile exhalations.

The second half of Membrane 2 is wiry and metallic, sharp, echoing clangs followed oxy-acetylene hisses, all of which seems to force gasps of pain from Butcher’s horn. It feels like we’re listening to some mechanical entity under duress, about to fall apart. Yet just as suddenly as it started, it stops, gearing down to something more subdued, a series of churning hums and brassy whispers. (PAUL MAGREE)