Augmented Instruments Laboratory, based out of the Centre for Digital Music at Queen Mary, focuses on developing new instruments and interfaces for musical expression. The concert will feature a programme of performances by the designers themselves plus special guests Kuljit Bhamra and Jonathan Reus, and an interval for exploring interactive installations.

NICOLE ROBSON – Rhythm of the Heart 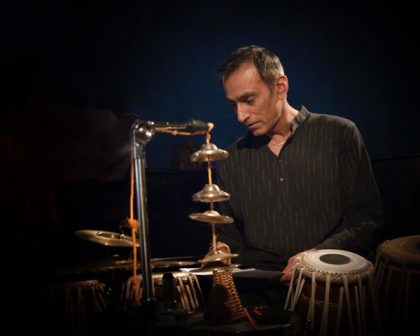 Kuljit Bhamra is a proliaic composer, musician and record producer whose main instrument is the tabla. He is best known as one of the record producers who pioneered the British Bhangra sound and for his many collaborations with musicians from different genres and continents. Kuljit has worked on numerous ailm scores, including Bhaji on the Beach, A Winter of Love, Bend it Like Beckham and appearances on The Guru, The Four Feathers and Charlie & The Chocolate Factory. He also appeared in Andrew Lloyd Webber’s hit musical Bombay Dreams, for which he performed as on-stage percussionist. He went on to write the Indian music for the West End musical The Far Pavilions and more recently, he co-orchestrated the music for the west end musical adaptation of Bend it Like Beckham in which he also performed on stage. He is the recipient of many awards including a platinum disc for outstanding record sales presented by the much-loved BBC Radio DJ, John Peel who was a big fan of his music. His cutting-edge projects and ground-breaking educational work earned him the prestigious honor of MBE in the Queen’s birthday list 2009. In his ongoing mission to Demystify Indian Music, Kuljit recently created a new universal Indian Drum Notation System which he is currently disseminating with his company Keda Music. In this performance, he will be playing a brand new and innovative instrument which he describes as “An exciting new development in Indian music!”

Laurel S. Pardue has worked in music tech and instrument design for over 15 years capturing complex virtuosic interactions. She focuses on real-world performance designing hand controllers for Visual Music Systems, Gamelan Elektrika (debuted with Kronos Quartet at the Lincoln Center in 2010), electronic tablas for Kuljit Bahmra, and most recently, the Svampolin. She holds 4 degrees from MIT and completed a PhD at Queen Mary University of London where she continues research in collaboration with Aalborg University in Copenhagen looking at technologically based violin augmentations to redefine the way we learn and play the violin. She’s also an active violinist having played at festivals throughout the UK, France, NY, SF, live on BBC Radios 3,4, & 6, and appeared on German television, all with various artists including Sam Lee, Mishaped Pearls, Arnold Dreyblatt, and, as Bitchlovsky, playing semi-improvised violin with live electronic music. 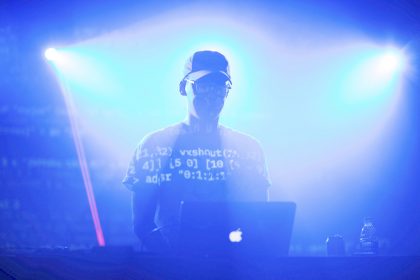 Jack Armitage is a designer, musician, artist, technologist and researcher, currently a PhD student in the Augmented Instruments Lab at Queen Mary University of London, and previously a research engineer at ROLI. He performs live coding music and visuals as Lil Data (PC Music), and produces music as half of the band Offer (with Adult Jazz vocalist Harry Burgess). He tutors in interaction design at the Royal College of Art, hosts workshops in live coding and digital musical instrument design, and contributes to open source projects.

Jonathan Reus is a Dutch-American experimental composer and founder of the nonprofit cultural initiative iii (https://instrumentinventors.org/) in The Hague. Jonathan Reus presents the debut of a new electronic-folk project centred around the sound world of the Appalachian mountain banjo. For the past year, he has been an intermittent resident artist at the Augmented Instruments Lab of Queen Mary University’s Center for Digital Music (C4DM). There he has been working on developing a new kind of electric mountain banjo that expands on the sound world of the instrument while also keeping a commitment to its uniquely American identity, its “wild” status in the European lexicon of instruments, and pre-industrial playing techniques whose origins lie in the gourd banjos of West-Africa. The result is a strange and intimate mixture of jagged folk riffs and expressive electroacoustics.

Giacomo Lepri will create a live performance using his interactive sonic sculptures: The Chowndolos. These sonic designs are based on a magnetic pendulum: an oscillating stick whose trajectories are altered by magnets placed underneath the device. The magnets at the bottom of the pendulum can be arranged to compose new shapes. Different conaigurations will therefore modify the pendulum oscillations and the sonic patterns. The unstable patterns produced by the pendulum oscillations are transformed into sound, articulating a music which evolves based on the pendulum motions. Giacomo will be joined onstage by multi-instrumentalist and Augmented Instruments Lab member Nicole Robson.

Sunday is a quadraphonic piece for guitar drone, delay lines and tape. It is an adaptation of an excerpt from the rock opera I – A two sided Hikikomori. Giulio Moro is a guitar player, instrument designer and music technologist. 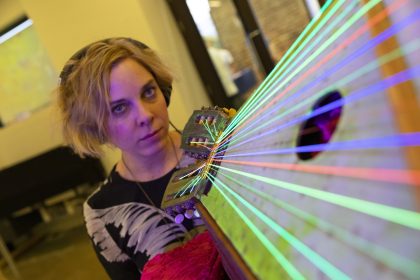 INSTRUMENT SEMATARY is an interactive sonic artwork in which broken, preloved classical instruments that have been brought back to life with a weird new digital identity. Inspired by Stephen King’s 1908’s horror story Pet Sematary in which deceased animals return to life with unfamiliar, evil personalities, and the current state of climate change emergency, this work questions the environmental impact of materials used in for musical instrument design in the digital age.

Data Dreaming is a multimedia performative installation driving nuanced gestures to create ethereal audio-visual compositions with an interface resembling a household lamp. Rather than addressing functional requirements, the wood pyramidal object invites viewers to explore and compose enchanted sonic textures and aictional visual renderings. Inspired by the internet of things (IOT) technological shift, the installation depicts an alternative future where household appliances and data are elicited for creative purposes. https://ars.electronica.art/outofthebox/en/data-dreaming/

NICOLE ROBSON – Rhythm of the Heart

Inspired by artistic activities that bring new life and meaning to everyday objects, Rhythm of the Heart is an interactive installation that repurposes a metronome to move in time with our heartbeat. It reverses our relationship with the object and exacts a kind of revenge as the metronome aights against its pendulum mechanism to swing in time with our internal rhythm. At the same time, the tempo of an accompanying song by dance band Stats fluctuates with your heartbeat as you breathe and move.