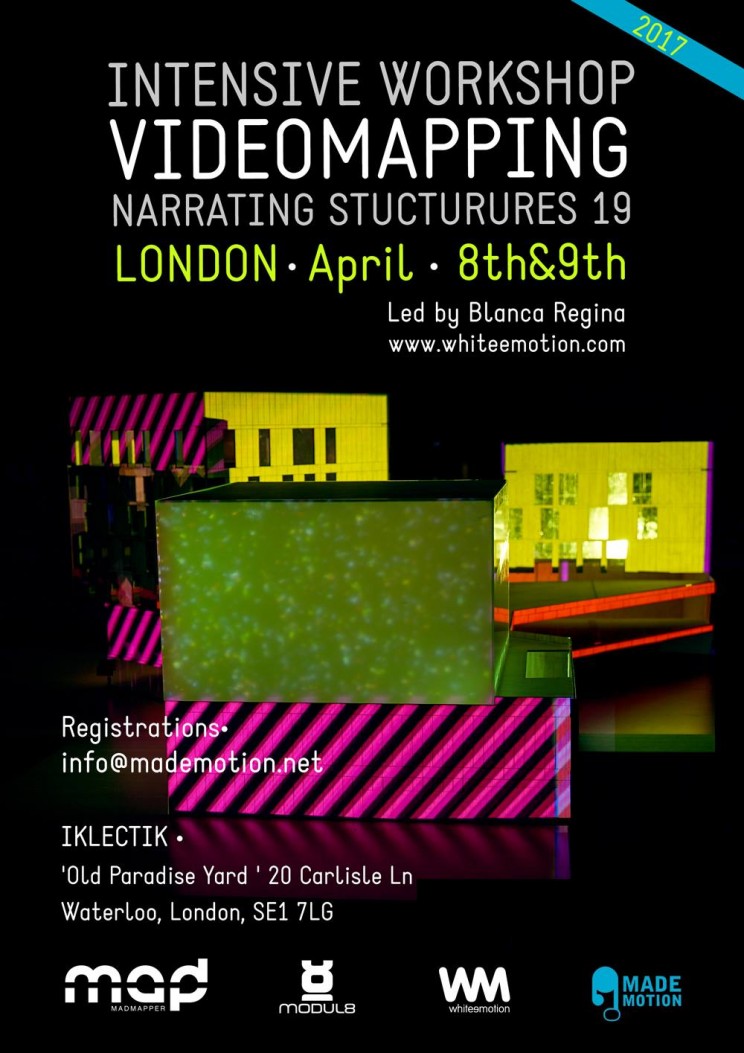 ‘Narrating Structures’ is an intensive workshop where we introduce projection mapping.  We will look at diverse techniques for the production of audiovisual projects in architectural spaces and objects and also its application in artistic and creative practice.

The 2-day workshop is presented in sections with hands-on practice.

– Introduction to the mentor and presentation of their work in this field.

– Learning multiple techniques and applying them using the different spaces and structures.

–  Introduction to Modul8 and Syphon.

– Creation and presentation of a specific group project.

At the end of this workshop you will be able to:

– Shape light into objects and spaces

– Project management and networking with local and international communities.

This workshop is for artists, graphic designers, architects and anybody interested.

Bring your own computer.This workshop is oriented to Mac users. A mac laptop with osx 10.7 is recommended. 10.6 is not supported.

You can bring also If you have, midi controller, projector, model/shape you want to map on,  DMX controller (Artnet, Enttec or minimad)

Dr. Blanca Regina Pérez-Bustamante is an educator, artist, and curator, based in London.

She is involved in creating mixed media performances, installations, and film and is currently teaching as lectures of Events and Experience Design at the School of Fine Arts and Music at the University of Kent.

She is also a curator.  In 2012, with Steve Beresford, she started Strange Umbrellas, a platform for free improvised music and visual art and later Unpredictable Series. Her performances include collaborations with artists such as Leafcutter John, Steve Beresford and Matthias Kispert. Last works include Unpredictable, a film about musician and artist Terry Day. In 2015 she presented a mayor exhibition in Oaxaca, Mexico called ‘ Ephemera and Expanded Audiovisuals.’