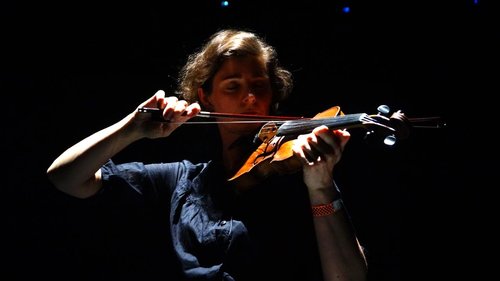 Angharad Davies is a Welsh violinist working with free-improvisation, compositions and performance.

Her approach to sound involves attentive listening and exploring beyond the sonic confines of her instrument, her classical training and performance expectation.

Much of her work involves collaboration. She has long standing duos with Tisha Mukarji, Dominic Lash and Lina Lapelyte and plays with Apartment House, Cranc, Common Objects, Richard Dawson’s band and Skogen. She has been involved in projects with Tarek Atui, Tony Conrad, Laura Cannell, Jack McNamara, Eliane Radigue, Juliet Stephenson and J.G.Thirlwell.

She has released records on Absinth Records, Another Timbre, Potlatch and Confrontrecords.

Her album Ffansion | Fancies was voted in the top 12 albums for Radio 3’s Late Junction. 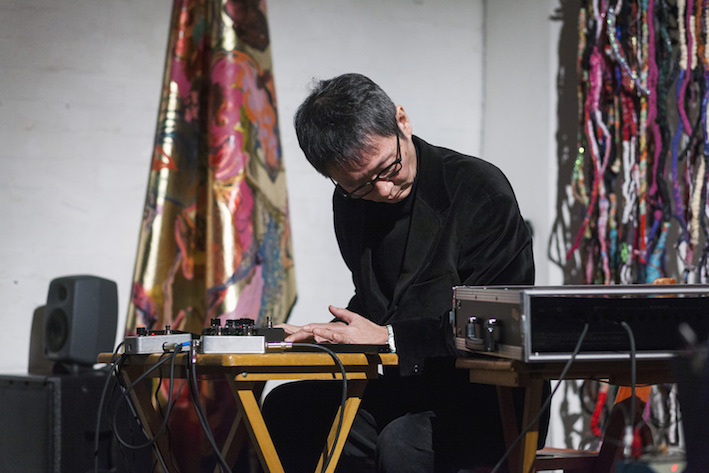 Ken Ikeda (b. 1964, Japan) is a composer and performer, born in Tokyo. After studying at Berklee College of Music, he has exhibited sound art and visual installations around the world, and has worked with John Russell, Eddie Prevost, David Toop, Simon Scott, Toshimaru Nakamura, Tetuzi Akiyama and many other improvising musicians; He has collaborated with, amongst others, artist Mariko Mori, Hiroshi Sugimoto, Tadanori Yokoo; and composed and recorded for film maker David Lynch. He released CD albums from Touch, Spekk, Baskaru, White Paddy Mountain and Home Normal. Ken Ikeda currently lives and works in London, UK.

Phil Minton comes from Torquay in the UK. He played trumpet and sang with the Mike Westbrook Band in the early 60s- Then in dance and rock bands in Europe for the later part of the decade. He returned to England in 1971, rejoining Westbrook and was involved in many of his projects until the mid 1980′s.

For most of the last forty years, Phil has been working as a improvising singer in groups, orchestras and situations, in various locations worldwide. Some composers have written pieces that especially employ his extended vocal techniques and improvisations. He has a quartet with Veryan Weston, Roger Turner and John Butcher and ongoing duos with all the above.

Phil also sings with many other musicians including Audrey Chen, with whom in the last ten years, he has performed worldwide. And recently, after a long break, he’s been involved in several of American composer Bob Ostertag’s projects.

Since the eighties, his Feral Choir, where he voice-conducts workshops and concerts for Anyone Who Wants to Sing, has performed in over twenty countries.

Turner has been working as an improvising percussionist since the early 1970’s, collaborating in numerous established and ad hoc configurations.

He has toured and played concerts worldwide from Sydney to the Arctic, Tokyo to Belfast, New York to Beirut.

This concert series is made possible through the goodwill of the musicians involved and the support of IKLECTIK.