IKLECTIK presents the launch of Sonic Urbanism: a publication exploring reverberations in a new field, hosted by Theatrum Mundi and &beyond 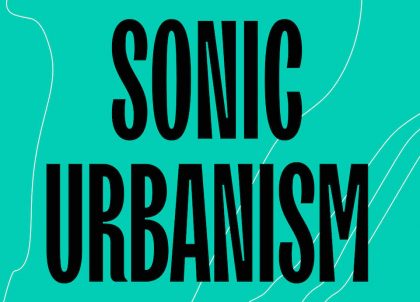 Theatrum Mundi and &beyond invite you to celebrate the launch of this brand new collection of writing on Sonic Urbanism. Join us for an evening of discussion, performance and music, opening with a roundtable: ‘How could a sonic urbanism be socially and politically critical for cities now?’ with contributors Sara Adhitya, Sharon Phelan, George Kafka, John Bingham-Hall. Artist and Researcher Sharon Phelan will also be presenting a new live work, At the Threshold, a narrative soundscape incorporating field recordings, audio feedback loops and voice synthesis. The evening will culminate with drinks and a music selection by saxophonist and composer Ben Vince

A print copy of this collection of essays on sonic communities, urban composition, acoustic architectures, phonographic methods, and public performance projects, will be included in the ticket price.

Sara Adhitya is an urban designer and researcher. She is the co-founder of the Universal Composition Laboratory at University College London. Her research-by-design work focuses on “composing the city” and how sound and music practices can improve the quality of design of urban environments.
Sara Adhitya

Sharon Phelan is an artist, researcher and musician. Her practice engages in digital media, sound art and experimental music. She is currently working on her PhD in Digital Arts and Humanities at Trinity College Dublin.
Sharon Phelan

George Kafka is a writer, editor and researcher based in London. He writes about architecture and citiesand has written for Metropolis, The Architectural Review, The Architects’ Journal, Frieze, Disegno, and others. He is a founding member of the &beyond editorial collective and have previously worked as an editor at uncube and Thinking City. He is also currently assistant curator of the Oslo Architecture Triennale 2019.
George Kafka

John Bingham-Hall is the Director of Theatrum Mundi. He has a PhD in Architectural Space and Computation from University College London, where he is Honorary Senior Lecturer at UCL STEaPP. He has also held posts at LSE Cities and Central Saint Martins in London.
John Bingham Hall

Theatrum Mundi is an independent research centre operating from both London and Paris, which aims to expand the crafts of city-making through collaboration between artists and urbanists. We lead research and creative projects that stimulate new thinking about the way urban design shapes the public lives of cities. Sonic Urbanism is one of a number of diverse projects currently underway, each of which takes multiple forms including workshops, commissions, exhibitions, research, talks, performances, and publications. Follow them on Twitter and Instagram (@cityastheatre) or visit their website for more.