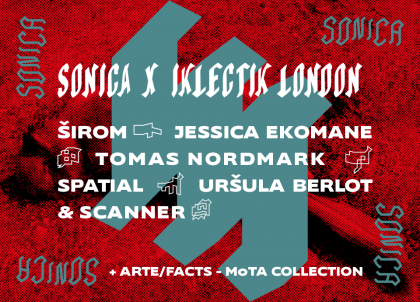 Acclaimed best experimental festival of territory of ex Yugoslavia, SONICA from Ljubljana is curating a special night at IKLECTIK, as part of its 5th anniversary celebration.

SONICA brings the cult Slovenian trio Širom, whose album was featured this summer as ‘Contemporary Album of the Month’ in The Guardian. Don’t miss the exclusive premiere of their latest release in London!

The night will also feature UK premiere of the French-born Berlin-based artist Jessica Ekomane, who will present her new immersive surround live performance.

London based Tomas Nordmark,  will present ‘The Neck’, his new 4-channel commissioned piece, followed by his AV performance. This commission is supported by the Swedish Arts Grants Committee.

London based multidisciplinary artist and musician Spatial will present ‘Transduction’, an opti-sonic intervention of abstract animation of visual music for projection and multi-channel sound.

Before the concert there will be the screening of the new video work by Slovenian artist Uršula Berlot with sound design by Scanner.

SONICA is curated by MoTA – Museum, award-winning experimental platform for research and production of Transitory Art.

Alongside the concert MoTA is showcasing Arte:Facts, a selection of artworks from MoTA Collection by artists such as Tristan Perich, Andy Lomas, Zimoun and others.

“It occasionally recalls the junkyard compositions of Moondog, the hypnotic tuned percussion of Steve Reich, the controlled chaos of the Art Ensemble of Chicago, or the shanty-town minimalism of the Penguin Cafe Orchestra.” **** The Guardian

“Mostly instrumental folk manoeuvres that are trad at root, but dreamlike and cubist in their arrangements, and played on a vast array of stringed things and percussive gizmos.” **** Buzz magazine

“This is deeply enjoyable music that refuses to be anything but itself and is joyful because of it.” 5/5 UK Vibe

“As poetically wondrous as it is (sometimes) supernatural and otherworldly … There are really few musical excursions and explorations quite like it.” Monolith Cocktail

“Fascinating music that you can easily become addicted to, in short, that’s what it comes down to.” – Moors Magazine 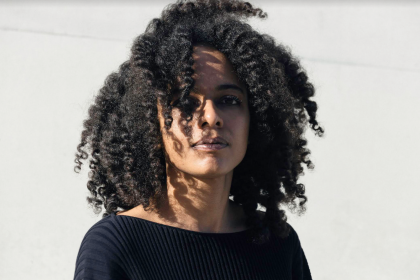 Jessica Ekomane is a French-born and Berlin-based electronic musician and sound artist. Her practice unfolds around live performances and installations. Her quadraphonic performances, characterized by their physical affect, seek a cathartic effect through the interplay of psychoacoustics, the perception of rhythmic structures and the interchange of noise and melody.

Her ever-changing and immersive sonic landscapes are grounded in questions such as the relationship between individual perception and collective dynamics or the investigation of listening expectations and their societal roots Jessica Ekomane is one the six composers chosen as collaborators by Natascha Süder Happelman for her installation at the German pavilion of the Venice Biennale 2019. She’s also part of the SHAPE Platform roaster of artists for 2019. September 2019 will see the release of her first LP Multivocal via Important Records. Her work has been presented in various institutions worldwide such as CTM festival (Berlin), Ars Electronica  (Linz), Dommune (Tokyo) and Bemis Center for Contemporary Arts (Omaha). 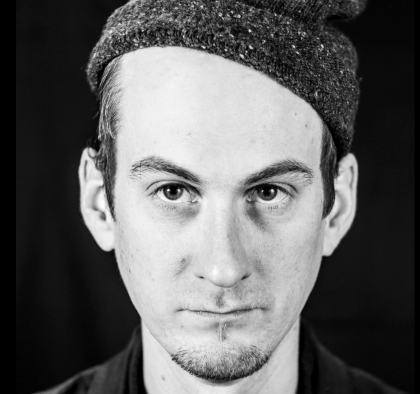 Tomas Nordmark is a Swedish-born composer and artist living and working in London, United Kingdom. Educated at the Department for Studies of Social Change and Culture at the University of Linköping in Sweden he studied Audio Culture and Contemporary Art. His compositions and works has so far been featured in opera, public installations, short films, theatre plays and in exhibitions. In January 2019 he released his solo debut album “Eternal Words” which The Guardian explained as “a heavenly, palate-cleansing series of minty-fresh synthesised drones and bleeps that manage to tell stories that resolve without even hinting at melody.” while The New York Times added “a meditative, nearly ambient foundation: sustained, consonant tones like distant horns. But the foreground is jittery, full of unpredictable, glassy tones that briefly hover, then disappear.” Engaging in artistic research, Nordmark’s projects are investigations in the humanities, the natural and the unknown. 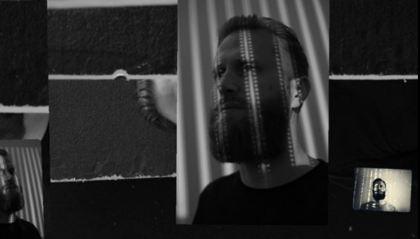 Spatial is an electronic musician and multimedia artist from London whose work pushes the dynamics of sound system culture incorporating low frequency vibration, hacked code, and optisonic experiments. An unconventional artist in the turbulent realm of bass music, Spatial combines a preoccupation with emergent behaviour, rule based repetition and chaotic systems with an ability to shape dubbed out, cracked and reductive sonics into audible geometric form. Through textured intricate production, Spatial’s releases and live sets bring corporeal presence carved out with a minimalist’s scalpel.

MoTA is a multidisciplinary platform dedicated to advancing the research, production and presentation of transitory, experimental, and live art forms. MoTA is a museum without a permanent collection or a fixed space. Instead, its programs are realised in different locations and contexts in temporary physical and virtual spaces. MoTA organizes and supports transitory art in the form of continuous events, exhibitions and educational programs both locally and internationally. As its name indicates, MoTA examines what a museum can be today and in the future. MoTA is in constant search for the new, the uncertain, and the undefined.

MoTA works on several continuous programmes & projects: MoTA LAB – a Space for Art & Ideas, the annual SONICA Festival, in addition to regular music programmes such as SONICA Series and SONICA Classics. Within the years of running a residency programme MoTA has established T.R.I.B.E. – a network of residency spaces in the Balkans & Eastern Europe. MoTA has also initiated the research and archive platforms ArtistTalk.eu, Mediateque MoTA & Tomaž Brate, the interdisciplinary research project Nonument, and TESLA Award. 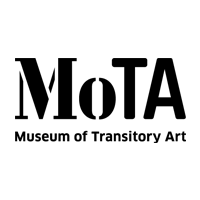 SONICA night is supported by SHAPE Platform and Ministry of Culture of the Republic of Slovenia.