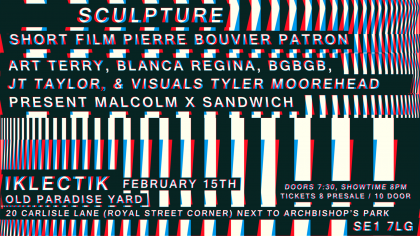 We are glad to put together two very different audiovisual performances featuring ‘Malcolm X Sandwich’ and the duo Sculpture plus a new short film by Pierre Bouvier Patron.

Created by Art Terry a Malcolm X Sandwich is a performance project created radio theatre which places Marcus Garvey in a former squat turned Airbnb discussing Black Nationalism’s influence on the gig economy. With vibraphone by JT Taylor, voice and electronics by Blanca Regina and BGBGB and video projection by Tyler Moorehead.

Art Terry is a songwriter/musician from Los Angeles. His songs explore sexuality, black politics and religion, through a lyrical fusion of psychedelic folk music and orchestrated funk. A singer and pianist, Art underpins deeply personal lyrics with dense melodic textures. His last album Sex Madness it’s been reviewed by The Wire Magazine in Jan 2020 as: ‘ an amazing album, all the more jaw-dropping for its deceptive simplicity and for the way it refuses to funk out a more obviously raunchy soundtrack. Terry is a precious beam of light in a confusing world.’

JT, drummerman. Mostly, but also partly Neanderthal /panda, a pandathal. Likes to quietly express in rhythm and rage thru beats, but most often observed chewing bamboo ponderously, ever presently. He enjoys creating moods and energy thru drumming out tunes in a form of morse code with bamboo sticks held lightly in his large leathery paws- did you hear it?

Blanca Regina is an artist, curator and tutor based in London who is currently involved in creating audiovisual performances, sound works, installations and film.

Tyler Moorehead is a multi-disciplinary artist exploring the universality of human experience through symbols, artefacts and games.

With an interest in the links between societal, environmental and emotional breakdown, Tyler considers the sustainability of the individual ‘under pressure’, within the context of identity and place. Her video installation ‘Politus: What we choose to remember’ debuted at Tate Modern as part of ‘Malcolm x Sandwich’ performances for ‘Art on the Air’ 2019.

Tyler was included in the title ‘100 Words 200 Visionaries share their hopes for the future,’ Conari Press, and is currently completing a masters in Experience Design at the Royal College of Art, London. Her spoken word climate change piece ‘Parts Per Million’ will debut at Iklectik, London on 27 February, 2020.

Pierre Bouvier Patron is a visual artist based in London.

He is currently working with different media such as digital video and film, exploring the boundaries between them and creating moving image works, performances and installations. He has developed many practices and skills in various areas such as experimental film, documentary films, music videos, etc.

He has been involved in video screenings and video performances, in solo or collaboration with musicians such as Syd Kemp, Neil’s Children, artist Blanca Regina, among others.

His latest works include Unpredictable: Conversations with Improvisers, a series of 12 videos about improvisers in the UK. It also includes extensive participation with collectives such as Unpredictable Series, Strange Umbrellas, and several festivals.

Projected Music and the sound of optical agitation