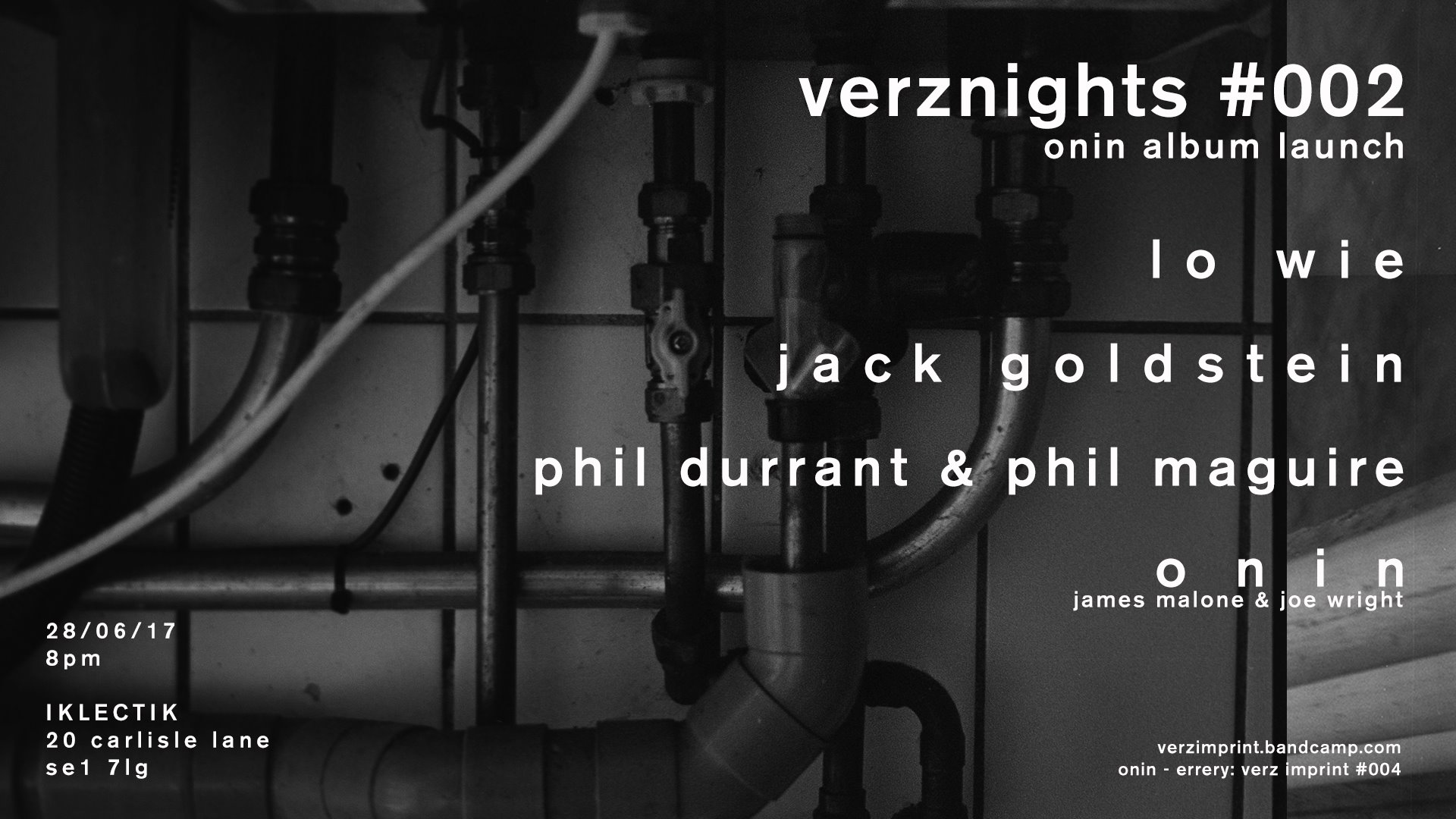 Verz Imprint is a netlabel and event series run by sonic and visual artist Phil Maguire, that supports and curates sonic/visual/text works based loosely on ‘quiet’. Current releases include solo computer music by Phil Maguire, and an album of adapted field recordings by outsider artist Marcel Gumms.

This will be the second verznight event, launching Onin’s first album Errery. It will be the fourth release on verz imprint.
Onin
Onin is the collaborative duo of James Malone and Joe Wright. The duo’s first album, Errery, documents their early explorations, combining unique approaches to the guitar and saxophone.
James Malone – Guitar
Joe Wright – Saxophone & Feedback System
Lo Wie is Beckett’s Typist and a member of A.Typist, and organising a music composition concert series, namsan. Currently staying in London.
Phil Durrant
Born near London in 1957, Phil Durrant is an improviser/composer/sound artist who has devised his own virtual performance instruments using Reaktor. Recently, he has been performing solo, duo (with Phil Maguire) and trio concerts (with Mark Wastell and Richard Sanderson), using an analogue/digital modular synthesizer system.
As a violinist (and member of the Butcher/Russell/Durrant trio), he was one of the key exponents of the “group voice approach” style of improvised music. In the late 90s, his trio with Radu Malfatti and Thomas Lehn represented a shift to a more “reductionist” approach.
Durrant’s exploration in the use of live electronics to expand the timbre of the violin, evolved into the creation and building of self-made virtual instruments. His live sampling/treatments duo with John Butcher and his work MIMEO, saw Durrant move from the use of hardware to the use of software in live situations. He has always been keen to transfer the flexibility of playing an acoustic instrument, into his laptop performances.
Durrant also performs regularly with the acoustic/electronic group Trio Sowari (with Bertrand Denzler and Burkhard Beins). In addition, he is an Associate Lecturer at Southampton Solent University.
Phil Durrant has also collaborated and composed site-specific music for a wide variety of choreographers, including Maxine Doyle, Susanne Thomas, and Gill Clarke.

I make reductive music with computers and recordings of things.
Currently, I’m making pieces with sine tones, noise, and cheap computers.
Sometimes I write music for instruments.
The music I write investigates issues of identity and place via timbral qualities of sounds stumbled upon
in day-to-day life: environment, software, internet.
I devise listening scenarios for individuals, and ensembles. These examine relationships to the place in
which you find yourself. Sometimes the individual/ensemble is passive in these locations, and
sometimes they contribute sounds and actions at odds with the situation.
I compose soundtracks for puppetry company Sort of Theatre. I play samplers in multimedia ensemble
Galvanize, and latino-electronic band Arcadio.
I have won 0 prizes, appeared on 1 national broadcast, and performed at 2 major festivals.