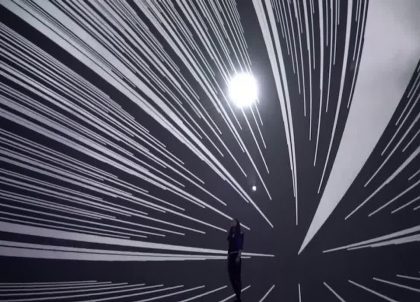 Today we live in the present future more than ever. We are right in the middle of two great crossroads that will determine the future. We talk about the Anthropocene and a new phase in human evolution, augmented and reconnected by technology.

Convinced that transformative technology must be centred on the human being, the future collective intelligence augmented by technology will become in a few years a deep global mind already announced by Terence McKenna at ArtFutura 92.

Maria Almena is a Spanish London-based creative director and a multimedia artist, co-founder of the creative studio, Kimatica Studio, and art curator of Flux events. Maria’s practice research is exploring concepts of human consciousness and perception, making those transcendental ideas accessible to a modern audience, to inspire a reconnection with magical thinking. She is fascinated by the juxtaposition of the physical and spiritual, the virtual and real worlds, playing with perceptions aiming to transport the viewer into new worlds, using experimental technologies that help to dramatize the transition between different states of being and highlighting the importance of the journey in itself.

Anna Nazo is a performance artist working at the intersection of art, science, philosophy and computing technologies. Within live digital-physical performance, Anna Nazo’s work operates using spoken words/poetics that are co-written with AI in combination with drones, data and CGI. Anna Nazo brings in the performance poetics, brainwaves frequencies and flying robots embodied to manifest multidimensional supra-sensuous encounters, parrhesiastic truth-telling ethics, and the AI-drone-
human holobionts which enable quantum ghosting. Anna Nazo is currently a candidate for PhD in Fine Art (Performance), at the Royal College of Art, London, with Stelarc as an external advisor.

Every year, the 3D Futura Show presents the most outstanding international works of computer animation and reflects on the evolution, both technical and in content, of this creative field. A program that surprises us every year with its originality and technical capability.

IN COLLABORATION WITH:
Office for Cultural & Scientific Affairs – Embassy of Spain, London