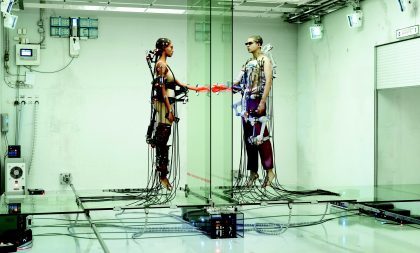 Today we live in the present future more than ever. We are right in the middle of two great crossroads that will determine the future. We talk about the Anthropocene and a new phase in human evolution, augmented and reconnected by technology.

Convinced that transformative technology must be centred on the
human being, the future collective intelligence augmented by technology will become in a few years a deep global mind already announced by Terence McKenna at ArtFutura 92.

A section dedicated to the best recent works of schools around the world. From 3D to special effects and motion graphics. Selected schools from France, Denmark, Canada, United States… Including ESMA, ISART, Gobelins, Ringling College of Art and Design, The Animation Workshop, New3DGE, MOPA, Rubika….

David Strang is the Award Leader for the BA and BSc (Hons) Digital Media Design course in the School of Art Design and Architecture. He is a practising artist in the field of sonic arts and interaction and is continually involved in developing workshops as well as performances, gallery based and site-specific installations. His main research focus is around sonic territories and sonic perception. David carries out his work utilising open source software, open hardware and hardware hacking.
Website www.davidstrang.co.uk

Working within art and technology Nicola Plant creates interactive
installations and virtual reality artworks, specialising in movement-
based interactivity using motion capture, electronic sensors and depth cameras. Nicola’s background is in new media art, computer science and music technology. She holds a PhD in embodied interaction and empathy from Queen Mary University of London. Her work focuses on how expressive movement can cross the boundary to translate the inner world of experience to a human connection. Presenting at venues such as the V&A, the Barbican as well as at conferences and festivals worldwide.
Website http://nicolaplant.co.uk/

xname is an Italian interdisciplinary artist based in London. She was born in Milan and she has been living many years in Bologna and Amsterdam. Her interests include metaphysics, electronics, software, performance and interactivity. She works with self made instruments and open source software for live performance and real-time installation, expanding from visual and software art to electronic music. Her work, ultimately cryptic, ritualistic and noise, engages in the construction of perceptual phenomena and environments that explore the concepts of illusion and the virtual, stimulating new forms of perception and questioning the notion of materiality and presence, and the role that memory, experience and eventually our ancestors have in the formation of identity. “My work, mixing different practices, talks about social and individual identities, and their interfacing with reality and imagination.
Website http://xname.cc/REBUS

Terry Trickett performs Visual Music worldwide at new media festivals and conferences. Sometimes the inspiration for his pieces is primarily musical; at other times, he uses Visual Music as a means of tackling a difficult subject or putting forward a controversial point of view. The subjects he chooses range far and wide, often taking him into unchartered territory – places where, sometimes, he invades the realm of science and, with the aid of music, bring the worlds of science and art closer together. In creating a piece of Visual Music, his aim is to share and communicate an idea through a process that combines
animated visual imagery with musical performance, usually on solo clarinet. Visual Music is effective because it succeeds in engaging with audiences at both an intellectual and emotional level.
Website http://www.trickettimages.com/

IN COLLABORATION WITH:
Office for Cultural & Scientific Affairs – Embassy of Spain, London