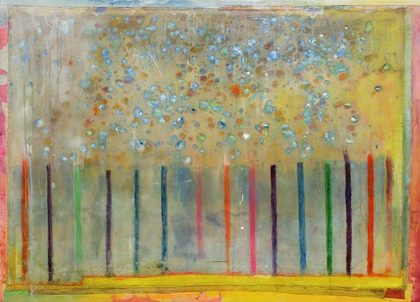 Following the good old rule of associating two extremes instead of choosing the middle path, Manu Louis collides the exotic and glamorous Pop Music of his youth with the naff sounds of the native Western Europe folk trash he always did his best to ignore (brass bands, Euro-Dance, Industrial Trance and old-one-man-synth-wedding entertainers…)
In October, he released a first single (7’ vinyl) under the Berlin label New Pangea (premiering on Spex.de) of his up-coming album ‘Kermesse Machine’ described by Contra Pop alumnus, Felix Kubin, as “really fun(k)y and clever and playful music and I’d be happy to hear it in the aquarium of the deep sea club anytime.”
‘Kermesse Machine’ is a mountain of plastic glasses in the streets the morning after, a tropical digital marching band, a guy giving all he’s got at Karaoke because there’s nowhere left to sing, a gypsy virtuoso playing synth with a trumpet sound.
Since 2015, he has performed solo more than 80 times everywhere in Europe and Asia accompanied by a crowd of electronic instruments and video projections.
Manu also composes and performs for/with the 30-piece Orchestra Vivo and Fanfares. His past projects include Funk Sinatra and The Music for Gardens.

Rita Braga is a singer, performer and multi-instrumentalist from Lisbon, based in Porto. She performs solo and sometimes collaboratively an unusual repertoire of songs in over ten languages, as well as original compositions and soundtracks. From time to time, she receives insight from cartoon personalities in her dreams (such as Bugs Bunny) on how to conduct her career.

Neil Luck is a composer and performer and director based in London, interested in live performance, fallible bodies, the pathetic, theatre, the esoteric. His work often attempts to frame the act of music making as something curious, or weird, or useful, or spectacular in and of itself. He works with my own groups and others.
He founded the experimental music theatre company ARCO. They have been making work for concert halls, galleries, publics, cities, broadcasters, festivals and ourselves nationally and internationally since 2008.
He co-founded the artist cooperative and net-label squib-box with Adam de la Cour and Federico Reuben. squib-box is my most unpredictable and dangerous live outlet. They have released around 30 albums by underground and radical artists they work with.
As a curator and producer he has organised a number of events and festivals which reflect his interests in performance, collaboration, and questions of taste, including one-offs (with ARCO, squib etc), series (e.g. BASIC with Nonclassical), two collaborative art-music festivals with Sam Belinfante (Notations 2008, The Voice and Nothing More), and a couple of interactive family art and performance weekenders with Tate Britain.
He also makes and presents radio, having produced several series and individual programmes for Resonance FM (Drivetime Underground). He made an hour long radiophonic quasi-music drama for BBC Radio 3 to follow the Last night of the proms, and has served as a guest co-presenter for the same stations Hear & Now show a number of times.

Maya Yianni is a SE London-based artist that adopts a DIY approach to her work.
Maya’s sound is unapologetic and frank, drawing inspiration from the menial and meaningful moments of life. In her early years she was surrounded by her father’s vast and eclectic record collection, which included musical gems from many genres – jazz, punk, soul… the list goes on – all of which have had a fragmental influence on Maya’s work and sound.