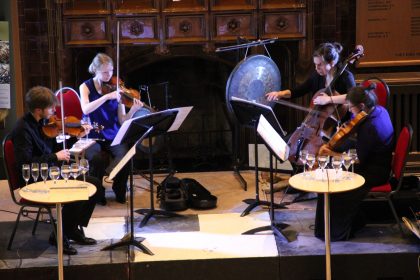 The London based Gildas Quartet  are the fourth guests of a series of streamed concerts taking place at IKLECTIK in London and at UCA in Farnham, after Marcus Kaiser (May 2019),  Stefan Thut (April 2019), Jessica Aslan and Emma Lloyd (March 2019).

The line between composition and improvisation is explored in Harry Whalley’s exciting use a pen, paper and an overhead projector. In Over Head Projection, the composer, performers and audience start with a blank page; and follow together as a compositional form and improvisational spaces are merged. “Thirteen Images from the Dark Land”, the subtitle of George Crumb’s seminal work Black Angels for amplified or electronic string quartet, gives a clue to the numerology and complex score world that Crumb has created. In this concert the audience shall be made privy to those esoteric scores through projections. The intimate letters between Leoš Janáček and Kamila Stösslová form the basis of his powerful second quartet. “You stand behind every note, you, living, forceful, loving. The fragrance of your body, the glow of your kisses – no, really of mine. Those notes of mine kiss all of you. They call for you passionately…“. A few birds and dreaming by Emmanuelle Waeckerle invites the performers and audience to ‘breathe’, to sound(ing) images and moving stills. They offer a silent image of the world, sound has been exiled from them.

The Gildas Quartet have performed to critical acclaim at major venues including the Bridgewater Hall, Purcell Room, Wigmore Hall, and on BBC Radio 3. Praised for their ‘energy, verve and refreshing approach’, their bold and explorative approach to performance has been recognised by the International Franz Schubert and Modern Music Competition, Graz, where they were first prize winners of the Audience Engagement Award in 2018.

Equally passionate about new music and works from the quartet canon, the Gildas have a concert series called ‘First Nights, Last Rites’ where they commission pieces to be partnered with late well-loved quartets. The first instalment, a new piece by Philip Cashian, was conceived to be performed alongside Schubert’s ‘Death and the Maiden’, receiving its premiere at the St Magnus Festival in Orkney. The quartet has also been privileged to work with composers including Sir Harrison Birtwistle and Colin Matthews on performing their works for quartet. www.gildasquartet.com

The here.here concert series, is a collaboration between bookRoom and the Audio Research Cluster at UCA Farnham, curated by Emmanuelle Waeckerle and Harry Whalley, around their common research in extended, textual, visual, gestural and object scores and ways to integrate or experience technology in text / music / film / performances. The project is supported by UCA research fund.

Emmanuelle Waeckerle is a London based interdisciplinary artist, vocalist, free improviser and composer and a Reader at UCA Farnham. Her practice explores the materiality and musicality of language and/as ways to engage with our interior or exterior landscape. Emmanuelle exhibits and performs regularly nationally and internationally, recently to launch her Ode (owed) to O cd (Wandelweiser, 2017) at Klangraum in Düsseldorf, Cafe Oto, with a.pe.ri.od.ic at Constellation in Chicago, by APTL ensemble at A Place to Listen in Victoria (Canada). She is part of the Wandelweiser Composer meet Composer mentoring project (2018 to 2020, Austria) and also host a house concert series Cosy Nook since 2016.

Harry Whalley leads the BA/BSc (Hons) Music Composition & Technology course at UCA Farnham and is an award-winning composer of contemporary classical, film and electroacoustic music. Harry’s works have been performed around the world and on BBC Radio 3 by music groups such as the Hebrides Ensemble, Artisan Trio, Red Note Ensemble, Vancouver Miniaturists Ensemble, Gildas Quartet, Edinburgh Quartet, Ron Davis and many others. He has composed the scores for film and computer games that have been featured at film festivals including Palm Springs, LA, Berlin and London, Banff Mountain Film and Book Festival.