German artist – composer – cellist Marcus Kaiser is the third guest of a series of streamed concerts taking place at IKLECTIK in London and at UCA in Farnham. 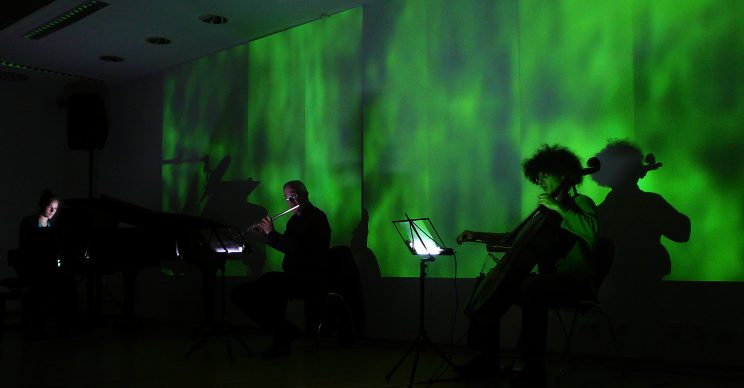 Musicians and performers drawn from the London experimental music scene as well as students, researchers and members of the Audio Research Cluster at UCA Farnham will perform UNTERHOLZ (undergrowth) an evolving multimedia work that exists since 2006.

UNTERHOLZ is a piece, that, like real undergrowth in a forest, continually changes in the course of time, i.e. from performance to performance and from place to place, carrying and sedimenting old, accruing new matter. The base situation is an installation with sine tones played back and a video showing a very slow sequence moving through a “jungle thicket”. Each performance of the piece is filmed and sound recorded. These recordings are then processed into the video/sound sequences for subsequent performances.

This will be the 18th performance of UNTERHOLZ, after Austria, Dusseldorf, Munich, Berlin, Ljubjana, and Tianjin (China) to name a few places and in London at the ICA in 2011 for the Cut and Splice ; Gründelweiser festival  performed by Manfred Werder (piano), Michael Pisaro (guitar) and Marcus (cello).

“If I should say something about my work, , I would say that it is like a graden – something shifting in the shadow –  – something in the sun – growing from my discretion. In a garden you can move freely – romp around – destroy – have love affairs – sweep old leeves. A garden lasts a long time . “(Marcus Kaiser, the book is alive! 2013)

Marcus Kaiser studied cello at the Robert Schumann University of Music and Media in Düsseldorf before graduating from the city’s Art Academy. Pursuing an interdisciplinary approach, Marcus produces works oscillating between art and music. Usually working simultaneously on different series and groups of works over long periods of time, the artist sometimes combines the results to complex installations on the occasion of major exhibitions – installations that may provide him with a starting point for interactions and further works of art. (Albertina museum press release, Vienna 2018)

Marcus is a cellist–painter–architect–composer¬–builder/designer–maker of sound pieces–video artist. He does not juggle these activities – he works on all of them simultaneously as if they were part of some vast rhizomatic assemblage. He paints jungles the way they grow: adding layer after layer of green until it is nearly a monochrome. He records individual layers of sound regularly over the course of many days, until, when simultaneously played back, these recordings reach a point of near saturation (in which, however, sonic features remain distinguishable). (wandelweiser by Michael Pisaro, 2009)

The here.here concert series, is a collaboration between bookRoom and the Audio Research Cluster at UCA Farnham, curated by Emmanuelle Waeckerle and Harrey Whalley, around their common research in extended, textual, visual, gestural and object scores and ways to integrate or experience technology in text/music/film/performances. The project is supported by UCA research fund.

Marjolaine Charbin is a French pianist, now based in London. Improvisation is at the heart of her practice, with occasional performances of compositions by herself and others. Her playing moves between the keyboard and the body of the piano, working with a variety of objects to create her sound materials. Collaborators include Eddie Prevost, Ute Kanngiesser, Olivier Toulemonde, John Butcher, Dimitra Lazaridou-Chatzigoga, Grundik Kassiansky, Guillaume Viltard, Jennifer Allum, Angharad Davies and dancer Julyen Hamilton.

Edward Lucas is an improvising trombone player holding many associations with musicians in London and beyond. He is is co-founder (with Daniel Kordik) of Earshots Recordings – their long running trombone and synth duo led to the formation of the concert series and label for improvised music and field recording works. https://lucas.earshots.org/

Laura Lee is a creative practitioner, guitarist, composer & technologist. Lecturer of Music Composition and Technology and undertaking a practice-based PhD in collaboration with Ableton Live at University for the Creative Arts. Laura presented at International Guitar Research Centre Conference (2016) at the University of Surrey with Dominik Strutzenburger, Head of Pop Division at the Vienna Conservatory and Human vs. Machine in Post-Rock Guitar Collaborative Performance at the University of Wuerzburg. https://lauraleetv.wordpress.com/

Emmanuelle Waeckerle is a London based artist, performer and improviser and a Reader at UCA Farnham, Her practice deal with the materiality and musicality of language. Emmanuelle exhibits and performs regularly nationally and internationally, recently to launch her Ode (owed) to O cd (Wandelweiser, 2017) at Klangraum in Düsseldorf, Cafe Oto, with a.pe.ri.od.ic at Constellation in Chicago, by APTL ensemble at A Place to Listen in Victoria (Canada). She is part of the Wandelweiser Composer meet Composer mentoring project (2018 to 2020, Austria) and also host a house concert series Cosy Nook since 2016. www.ewaeckerle.com

Edward Shipsey is an improvising musician living in Tottenham using voice keyboard and percussion. He is a regular attendee at Eddie Prevost’s London Improvisation Workshop. Recently he has been making pieces with text and developing an interest in the Wandelweiser aesthetic.