The here.here concert series, is a collaboration between bookRoom and the Audio Research Cluster at UCA Farnham, curated by Emmanuelle Waeckerle and Harrey Whalley, around their common research in extended, textual, visual, gestural and object scores and ways to integrate or experience technology in text/music/film/performances. The project is supported by UCA research fund. 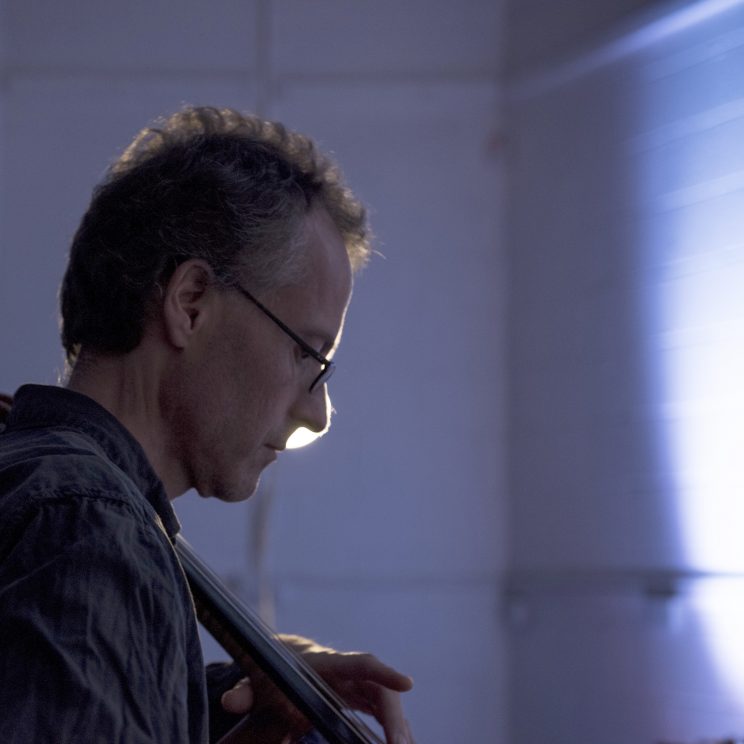 Swiss composer and cellist Stefan Thut is the second guest composer of a series of streamed concerts taking place at IKLECTIK in London and at UCA in Farnham. The other concerts this year are Gildas Quartet (October 2019), Marcus Kaiser (May 2019), Jessica Aslan and Emma Lloyd (March 2019).

Three pieces will be performed by musicians drawn from the London experimental and improvised music scene as well as researchers and members of the Audio Research Cluster at UCA Farnham.

along (2016) What kind of sound emerges when certain materials and stringed objects are dragged on the floor? How about playing an instrument as a response to the sound perceived?

two strings and three (2016) Related to the activity of dragging is bowing a string very very slowly, as in between stagnation and movement and as a time frame for a melody to unfold.

around (2017) Prior exploration of the venue and its surroundings influences the timeframe and the interpretation of the score.

Stefan is interested in processes and scores inviting both the performers and the audience to delve into a world. His work often incorporates everyday material alongside traditional instruments. For him “music is directly linked to the sensual, if the sensual is taken in a literal meaning as the starting-point of perceiving music at all.”

“And thinking about composition, I ask myself what kind of sounds could be added to the sounding world since there are already sounds occurring at every moment. (Interview with Stefan Thut, anothertimbre.com)

“As many of the words already used to describe the fledgling Elsewhere label (who released about in 2018) and its music are just as appropriate to Thut’s works—ambiguous, innovative, meditative, open, restrained, subtle…. “ (John Eyles allaboutjazz, Dec 2018)

Stefan’s work has been performed at the Kunstraum Düsseldorf, Kid Ailack Concert Hall Tokyo, Gez-21 Saint Petersburg, University of the Basque Country Bilbao, Lely Amsterdam , the Diapason Gallery, New York and at Säulenhalle Landhaus Solothurn, among other locations. His music and recordings have been released by Edition Wandelweiser Records, Another Timbre, Elsewhere, Intonema, INSUBrecords, Leerraum, to name a few.

As interpreter he has premiered solo-pieces by Jürg Frey, Radu Malfatti, Tim Parkinson, James Saunders, Taku Sugimoto, Taku Unami and Manfred Werder and he has performed with the ensemble incidental music in Berlin, Brussels, London and Zurich.

Angharad Davies is a London based  violinist, improviser and composer whose approach  to sound involves attentive listening and exploring beyond the sonic confines of her instrument, her classical training and performance expectation.  Much of her work involves collaboration. She has released records on Absinth Records, Another Timbre, Potlatch and Confrontrecords.

Phil Durrant is a multi-instrumentalist improviser/composer/sound artist who performs solo and group concerts; as a violinist (and member of the Butcher/Russell/Durrant trio), in the late 90s, with Radu Malfatti and Thomas Lehn, recently, performing solo and duo with Bill Thompson et al, using an analogue/digital modular synthesizer system. As a mandolinist, with guitarist Martin Vishnick and a quartet with Sue Lynch, Hutch Demouilpied and Dave Fowler. And with the acoustic/electronic group Trio Sowari (with Bertrand Denzler and Burkhard Beins) and Mark Wastell’s The SEEN.

Laura Lee is a creative practitioner, guitarist, composer & technologist. Lecturer of Music Composition and Technology and undertaking a practice-based PhD in collaboration with Ableton Live at University for the Creative Arts. Laura presented at International Guitar Research Centre Conference (2016) at the University of Surrey with Dominik Strutzenburger, Head of Pop Division at the Vienna Conservatory and Human vs. Machine in Post-Rock Guitar Collaborative Performance at the University of Wuerzburg.

Anna Menzies is a London based cellist who performs as a chamber musician, recitalist, soloist and continuo player. As founding member of the Gildas Quartet, Anna performs across the UK and internationally, at venues including the Wigmore and Bridgewater Halls, live on BBC Radio 3 and at festivals such as the Cheltenham and St Magnus.

Artur Vidal is a Spanish-born saxophone player who grew up in Paris where he studied music and history of art. Currently, in London, he is doing research on improvised music and practices composer Pauline Oliveros’ Sonic Meditations.

Emmanuelle Waeckerle is a London based artist, performer and improviser and a Reader at UCA Farnham, Her practice deal with the materiality and musicality of language. Emmanuelle exhibits and performs regularly nationally and internationally, recently to launch her Ode (owed) to O cd (Wandelweiser, 2017) at Klangraum in Düsseldorf, Cafe Oto, with a.pe.ri.od.ic at Constellation in Chicago, by APTL ensemble at A Place to Listen in Victoria (Canada). She is part of the Wandelweiser Composer meet Composer mentoring project (2018 to 2020, Austria) and also host a house concert series Cosy Nook since 2016.

Harry Whalley leads the BA/BSc (Hons) Music Composition & Technology course at UCA Farnham and is an award-winning composer of contemporary classical, film and electroacoustic music.  Harry’s works have been performed around the world and on BBC Radio 3 by music groups such as the Hebrides Ensemble, Artisan Trio, Red Note Ensemble, Vancouver Miniaturists Ensemble, Gildas Quartet, Edinburgh Quartet, Ron Davis and many others.  He has composed the scores for film and computer games that have been featured at film festivals including Palm Springs, LA, Berlin and London, Banff Mountain Film and Book Festival.

Yifeat Ziv is an experimental vocalist and composer, evolving in between free-improvisation, contemporary new music, jazz and sound art. She is the co-founder of experimental vocal quartet ABRA Ensemble and vocal jazz trio The Hazelnuts with whom she has released four albums and performed worldwide including Marseille Jazz des Cinqs Continents (FR), Tri-C Jazz (US), Safaricom Jazz (KE), Filter4Voices (CH) and Red Sea Jazz (IL). She is a current recipient of the Siday Fellowship for Musical Creativity.