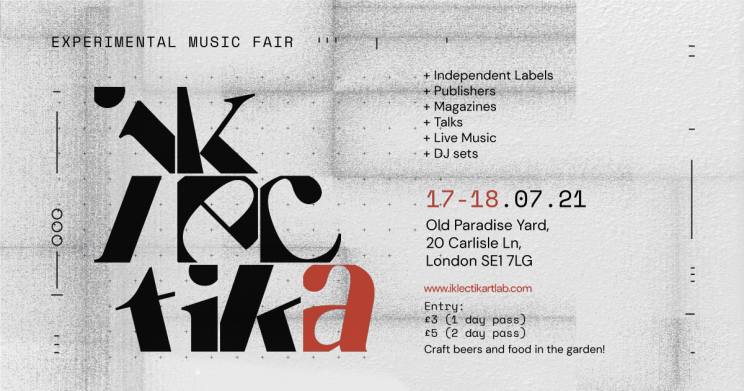 We are thrilled to announce IKLECTIKA, the first edition of our Experimental Music & Book Fair.

To celebrate IKLECTIK’s 7th anniversary and the return of live music, we have invited pioneering experimental labels, publishers and magazines to take part in a 2-day event full of talks, interviews, panel discussions, live acts and DJ sets.

Join us in celebrating the return of liveness in IKLECTIK’s beautiful outdoor space with craft beers and local food!

ARTISTS AND ORGANISATIONS ON SATURDAY
(In order of appearance)

Kate Carr
Kate Carr’s work is focused on the links between sound, place and affect, and she works across composition, performance and installation. She composes primarily with field recordings and also runs the sound art label Flaming Pines.
http://gleamingsilverribbon.com

Liz Helman
Liz Helman is a multi-disciplinary artist, working in time-based media. She is London based, self-taught and with no formal training as a composer. As a multi-disciplinary artist, Liz has always had an interest in ambient music and sound art as a form of expression. Her work, both visual and sonic, is a response to place and environment.
http://iklectikoffsite.org/liz-helman/

CLOT Magazine
CLOT Magazine is an established online publication and curatorial platform dedicated to artforms that explore science and technology, with a strong focus on media theory, philosophy, cultural studies and the most experimental art disciplines.
www.clotmagazine.com

Lula Criado and Meritxell Rosell
Lula Criado is Founder of CLOT Magazine. Meritxell Rosell is the Director and Editor in Chief.
Lula and Meritxell are two multidisciplinary editors, writers and curators. Their work lays at the intersection of Art, Science and Technology, capturing the zeitgeist of the 21st century. With academic scientific background (Molecular Biology and Genetics) – which they combine with Trend Analysis and Philosophy- they run CLOT Magazine, an online platform dedicated to Art explorations into Science and Technology.
Through CLOT Magazine they curate intellectual content, generate debate, research and decode trends in areas of: biomedia, body architectures and cyborgs, sound art, interfaces, artificial intelligence and virtual reality and generative art, among others. They have covered festivals and events organised by renowned cultural references like Sónar Barcelona, Unsound Krakow, CTM Berlin and ICCMR Plymouth, curated panel discussions (LASER/Leonardo at Central Saint Martins) and given talks and lectures for the Bioarchitecture and Genetics MA (Barcelona, Spain) and School of Textile (Boras, Sweden). They also contribute for other publications like SciArt in America and Interalia magazine.

Most Dismal Swamp Most
Dismal Swamp is a model for curating, collaborating and convivial speculation; a modular and miasmic crew. Operating at multiple scales and registers, Most Dismal Swamp is an art project, a curatorial MMORPG, a fiction, a party, a mixed-reality biome and an independent record label.
http://www.mostdismalswamp.com/

arebyte Gallery / Nimrod Vardi (Creative Director / Founder)  and Rebecca Edwards (Curator)
arebyte leads a pioneering digital art programme at the intersection of new technologies and contemporary cultures. Since net art’s inception in the 90s, arebyte follows the long tradition of artists working within the digital realm. Multiple voices are invited to create multimedia installations at arebyte Gallery, London, and online experiences at arebyte on Screen. Alongside the art programme, arebyte Skills features short courses on digital theory and introductions to creative software and hardware. Through workshops led by artists working within the digital realm, arebyte Skills provides practitioners and newcomers with hands-on techniques for digital making.

Alice Hoffmann-Fuller
Alice is an artist, writer and musician focusing on conceptual, community and curatorial practice. She is also part of the Corsica Studios history, working for many years in many roles and at present she oversees operating, whilst co-ordinating and co-curating Schemata, Corsica’s new arts programme. Currently producing a digital programme hosted in a pandemic-induced, virtual rendering of the venue, it is here that her enthusiasm for virtual spaces was born – creating new inclusive worlds that can bring together the alternative artistic community, with a view to merging the physical and digital realms.

Graham Dunning
Graham Dunning’s work explores sound as texture, timbre and something tactile, drawing on bedroom production, tinkering and recycling found objects. He is the founder of the record label Fractal Meat.
http://iklectikoffsite.org/graham-dunning/

Jon Wozencroft
Jon Wozencroft started Touch in 1981/2. The idea was to extend the scope of a record label by combining music publishing with the level of curation afforded to fine art, producing a series of audiovisual productions, and the chance to collaborate with New Order, Wire, Joseph Beuys, Cabaret Voltaire, Chris Watson, Mika Vainio, Fennesz amongst many others. He taught at the Royal College of Art from 1994–2019, specializing in the impact of sound and moving image on design practice. His research with Paul Devereux investigates the power of sound in prehistory with the focus on Preseli, Wales, source of the Stonehenge bluestones: www.landscape-perception.org

Loré Lixenberg
She is an experimental voice artist/composer and mezzo. She co-directs La Plaque Tournante and « CRU » Magazine in Berlin. Performed with experimental visual and sound artists like Stelarc, Bruce Mclean, Complicite & Simon Mcburney and composers such as Aperghis, Oehring, Turnage, Ligeti, Stockhausen, Furrer, Birtwistle, Brown, Ferrari, Oliveros, Acquaviva, Niblock, Toop, Dufour… She recorded the first complete John Cage’s ‘Songbooks’ on CD for Sub Rosa and is now orchestrating the Nancarrow’s piano player studies for her own voice. Lixenberg also performs her compositions using hyper-extentions of the voice in pieces such as ‘Bird’, her series of “Singterviews (PANIC ROOM)” and her real-time political opera installation ‘PRET A CHANTER’. She published an artist book ‘Memory Maps’ and a CD ‘The afternoon of a phone’ (£@B).
http://www.lorelixenberg.net/

Steve Goodman
Steve Goodman (aka Kode9) is an artist, writer, DJ and producer. He founded the record label Hyperdub in 2004 and Flatlines in 2019. His book Sonic Warfare was published by MIT Press in 2010 and in 2019 he co-edited Audint’s Unsound:Undead on Urbanomic Press. His music, remixes and DJ mixes have been released on Hyperdub and many others, and his installations have been exhibited at Barbican and Tate Modern.

Audio Virology by Steve Goodman
Originally commissioned as an video essay for Unsound Festival in 2020, Audio Virology explores the short history of viruses rendered audible, asking, within the context of a global pandemic, what they can teach us about our condition of generalised, digital virality.

Virtual Ground
Virtual Ground have been operating under the guise of a record label since the beginning of the 2020 lockdown and have since been releasing a broad selection of music from across the electronic spectrum. Formed by a likeminded crew of Leicester creatives, Virtual Ground seek to extend, bend and amplify the role of the record label by diversifying their output through unconventional avenues.
www.virtualground.art

ARTISTS AND ORGANISATIONS ON SUNDAY
(In order of appearance)

Earshots Recording
Earshots is concert series and label, bringing together improvising musicians and sound artists laying bare the sonic qualities of both our natural surroundings and sound making devices. The concert series was conceived to combine the performance of improvised music with the presentation of field recording work. The label was developed from the first concert recordings. Some releases are live recordings, some from the studio, and some from a specific location, introducing a field recording quality to the work. Some releases are also field recording works in their own right.
https://earshots.bandcamp.com/

Terry Tyldesley
Terry Tyldesley is an award-winning creative producer, founded inclusive music tech site Kitmonsters, and is on the board of music streaming co-operative Resonate. She makes music as Kat Five and with her band Feral Five, produces events including WITCiH Digital, and Music Tech Fest Berlin, and is a guest lecturer. http://kitmonsters.com/
https://resonate.is/

Abby Thomas
OTOROKU began releasing recordings from the live program of London’s Cafe OTO in 2012. When Covid-19 hit, a new digital imprint called Takuroku was set up to provide an outlet for new work being created over lockdown. Both labels aim to provide a way to help sustain both Cafe OTO and the artists involved through these incredibly challenging times.
www.cafeoto.co.uk

Mike Harding
After University (Durham, Modern History), worked at ZigZag. He has been running the audio-visual label Touch for 39 years and counting, and in this period has acquired much experience and information on disseminating cultural sounds to a wider audience – see also Touch Radio and Long Wave, his monthly radio show on dublab in Los Angeles. He also curates Ash International and Spire.
https://mscharding.net

Steven McInerney (aka Merkaba Macabre)
Steven McInerney (b. Melbourne, 1983) is a multimedia artist living in London. He has performed and exhibited internationally and is founder of Psyché Tropes.

Psyché Tropes
Psyché Tropes is a film company and label exploring the synaesthetic intersections between sound and its visual counterpart. est. 2014 by Steven McInerney.
https://www.psyche-tropes.com/

Chris Bohn
Chris Bohn wrote for Melody Maker and NME in the late ’70s and ’80s. For the past 20 years he has written under the name ‘Biba Kopf’, and is currently the Editor-in-Chief of The Wire.

John Butcher
Born in Brighton and living in London, John Butcher is a saxophonist whose work ranges through improvisation, his own compositions, multitracked pieces and explorations with feedback, unusual acoustics and non-concert locations. He is well known as a solo performer who attempts to engage with a sense of place. Resonant Spaces, for example, is a collection of performances recorded during a tour of unusual locations in Scotland and the Orkney Islands.
http://www.johnbutcher.org.uk/index.html

o.utlier
By its nature, an outlier stands apart. Yet, while mapping out a sonic terrain that is distinctly his own, this Irish native has found a home on revered labels including Naïf, Soul Music People and Appian Sounds. A resident DJ at the Astral Industries nights in London, he moves effortlessly between gnostic techno trips and ambient sets that tunnel deep into the unconscious. Across his sets and productions, he draws on a sound palette that includes everything from coarse-hewn drone and immersive field recordings to oblique percussive interventions and coruscating synths. Whatever the context, his enigmatic soundscapes are always dense in atmosphere and delivered with poise, making for journeys that are as cerebral as they are ritualistic. The year 2021 will see the release of his debut album, the launch of his dubplate series of dance-floor edits and the beginnings of his Titrate label, which will be an outlet for drone, live recordings and spatial sound experiments.

Atau Tanaka
Atau Tanaka conducts research in embodied musical interaction. This work takes place at the intersection of human computer interaction and gestural computer music performance. He studies our encounters with sound, be they in music or in the everyday, as a form of phenomenological experience.
http://www.ataut.net/site/