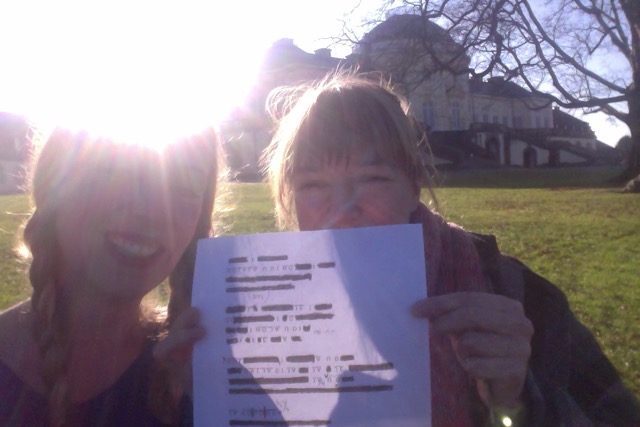 Hola Hu  is a yodel duet that juggles glitches and gaps, until silence takes over. The two performers, Doreen Kutzke and Myriam Van Imschoot, sing in strict unisono 11 versions of a known yodel tune from the German Harz Mountains that gradually transforms along the way and makes memory sing. Since its première on the Rotterdam Opera Days (The Player) the piece has toured galleries, venues and festivals (like recently Counterflows in Glasgow) as a secret cult hit.

Myriam Van Imschoot is a Belgian sound and performance artist, director and film maker working from the perspective of sound. She developed a distinct approach to sound composition as a physical, performative and socially engaging form that speaks back to the soundscapes of the world. Her work is influenced by local customs and voice techniques as well as the practice of field recording. She performed internationally at Rotterdamse Operadagen, Maerz Musikfestival, Rumptsti Pumpsti (Musik), Kaaiheater, L’actoral, Mucem, The Player, Kiasma Museum, Meakusma, Colours out of Space, etc. Her breakthrough piece What Nature Says is an a cappella piece that reenacts field recordings of nature in crisis. Her films draw from the art of portrayal and celebrate a collaborative approach. In the series Yodel Portraits she made portraits of/with Phil Minton, Doreen Kutzke and the Brussels YOUYOU-group (Le Cadeau). She is currently preparing a concert/installation on new polyphonies with contemporary music singers from the ensemble HYOID (première at Darmstadfestival July 2019).

Kutzkelina aka Doreen Kutzke (b. 1975) is a German actress, performance artist, composer, singer, and vocal-teacher specialised in the art of yodeling. She grew up in the Harz-Mountain region and started yodeling & singing at the age of 6. Her activities includes workshops, performances and concerts with numerous projects: with Malcolm Arison (The BossHoss) as Kutzkelina & The Devils Harmonica, with Dagobert and Philipp Bellinger as Kutzkelina & Die Österreicher, with singer and multi-disciplinary artist Ute Waldhausen as Parabelles, with performance artist and composer Daniel Löwenbrück as Raionbashi & Kutzkelina, with Volker Könitz as Kutzkelina & Herr Könitz, with performance artist Myriam van Imschoot, and solo as Kutzkelina. Doreen Kutzke has performed and held workshops internationally including festival appearances in New York, Bordeaux, Paris, Brussels, Oslo, London, Stockholm, Warsaw, Rotterdam, Los Angeles etc. She founded the Jodelschule Kreuzbergin Berlin and is teaching yodeling all over the world.

Yodel Portrait Doreen Kutzke is a short film with Doreen Kutzke, a singer from Berlin, who wins ‘Saddest Song contests’ with a howling cry yodel that leaves noone untouched. As a child who grew up in the former GDR she thought yodeling was a missile that can make walls crumble. A portrait at the intersection point where autobiography meets larger audio-cultures and sonic histories.The film was first released on International Yodelday 8 August 2014.
Credits
Video: Myriam Van Imschoot/ Portraitee: Doreen Kutzke / Script: Myriam Van Imschoot, in collaboration with Doreen Kutzke /Camera: Jorge Leon/Sound: Quentin Jacques. Produced by Sarma.
More info: http://oralsite.be/pages/Yodel_Portrait_Doreen_Kutzke