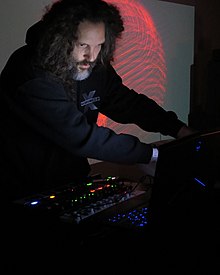 Siegfried Kärcher is an Artist with hundreds of exhibitions/concerts and known for his creative approaches to Art and Music. In 2018 he won the Musikmesse Electronic Beat Battle.
He is a early member of the Computer Scene since Commodore Homecomputers appeared and infected with the Electronic Music Virus since his first dancing steps at Technoclub Dorian Gray Frankfurt Fame.
Nowadays he hosts several underground events like 303 Day or Glitch it! Festival at Institute of New Media Frankfurt.
Once a Year he celebrates the Siegfried Kärcher Kunsttage. It’s an Art Festival in an unique old post-cold-war Station called Radom auf der Wasserkuppe near the former German/German Frontier. He releases his Music on Force Inc. / Mille Plateaux. A special Frankfurt Techno Label.His Art moves from Visuals to Audio like classic Paintings and Installations to Sonic Scultpures and live performances.

Mowgli & the slate pipe banjo draggers have been collaborating on various projects involving sound and visuals since 2012. Their performances have a large improvisational element and incorporate a range of acoustic and electronic instruments including self-made contraptions, found recordings and unorthodox use of technology.

Ores started producing electronic music in 1998 after being left without a drummer in his indie band. He is not fully dedicated to this. He is also half of Over the Hump duo and one of A’mas founder. He’s going to perform with modular synth.
soundcloud.com/bassik

L’Aubaine feels the music through colours. She brings you on a seamless visual journey, creating composition live like a painter on her canvas. She crafted her unique style over the years, mixing analogue and digital techniques in an unusual and elegant way. Her work is organic, graphical and painterly.

She performed in several festivals, events, club nights in UK and Europe.