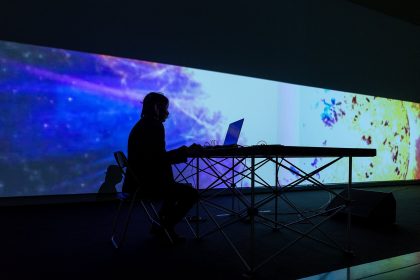 Sound Visual performance QUANTUM-TON is a 3rd chapter of his Hyper Serial Music project/series. The project expands on the history of serialism – an important 20th century method of music composition used by Arnold Schoenberg, Karlheinz Stockhausen and Pierre Boulez, among others – by incorporating new technologies and new perspectives, including artificial intelligence.
In the history of music technology, Hyper-Serial-Music will add innovation to the principle of Serialism three-point: “structural”, “complex” and “noisy”. These sounds are on the boundaries of the limits of human auditory perception and cognition.

– Evolution from past works –
In this work Tatsuru developed and evolved into more complex and higher quality results, unfolding the relation between sound and quantum’ energy as like fictionally science and the relation itself constructs the dramaturgy. By means of algorithmic simulation, principles designing the audiovisual substance are correlated directly on showing the physical side of the universe through human perception.

2003-2009 Bachelor and Diploma studies in composition with Akira Nishimura, Toshio Hosokawa and Sunao Isaji at Tokyo college of Music. 2007 in composition-class with Bernhard Lang at Implus in Graz. 2009-2013 MA-studies Compostion, Computer-programming and Multimedia-art with Wolfgang Heiniger at the Academy of Music “hanns Eisler” Berlin. His works are performed in Over 40 cities in Europa, and Argentina, Mexico, Colombia, Tunisia, Japan etc. Opera „Vitruvian“ was performed Berlin und London that innovative contemporary Opera, that to integrate from classical Music to new Technology. His main artistic theme is to integrate from classical compositions to new technology, as „TRANS-AGES MUSIC“, and to present the fundamental physical nature of the universe in the form of perceptional experiences, that could say aesthetics of “geometric structure”. The human perception of sound, a physical phenomenon, influences human beings and the “geometric structure” is a fundamental pillar that allows us to understand the true nature of the universe. Creating a way to experience even a part of the nature of the universe through sound. From 2016 he is composing Hyper Serial Music that will add innovation to the principle of Serialism three-point: “structural”, “complex” and “noisy”. Hyper-Serial-Music is the algorithm music generated by state-of-the art technology such as Artificial Intelligence than by native human intelligence only. He is performing this work in over 60 cities. 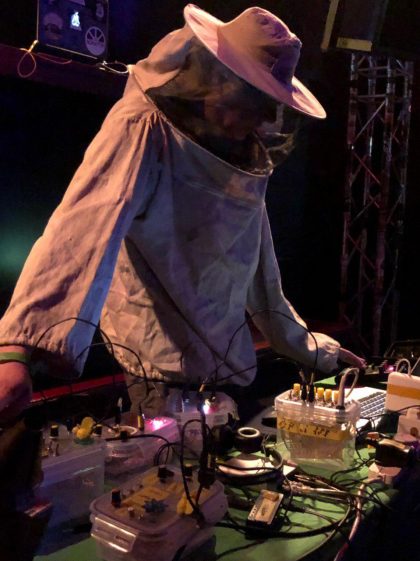 Studied: ‘Art and Design’ at Wakefield District College. ‘Audio Visual Studies’ (Film, Video and Sound) at Farnham, West Surrey College of Art and Design (now University for the Creative Arts) and post-grad. ‘Electronic Imaging and Sound’ at Duncan of Jordanstone College of Art and Design, University of Dundee, Scotland.
Bioni Samp’s first major installation was in 2013 at Barbican Arts Centre in London.
His ‘Hive Synthesis’ 24 hour installation and performance was part of the Hack The Barbican Festival summer show.

‘I have been creating bee sound sculptures and collecting bee hive sounds from London, Sweden, Slovakia, Czech Repubic, Poland, Canada, Ireland, Germany, Norway and Austria.
Bee recordings are amplified inside the ‘Bee Frequency Apiary. The processed bee sounds eminate from the Apiary. The simultaneous international bee voices across Europe call our attention. Collectively they are a loud global protest, a link to the past, to an active, sustainable connection with nature.
I am currently working on a new video installation for 2020 about the artist Henry Moore (1898 – 1986). Which uses sound to describe his sculptural forms.’

Digital Beehive – Installation and performance
Before the rational framed hive, before industrialisation, before ecocide, there were bees and their sounds. Listening to the gentle buzzing of bees is known to have a calming effect… But bees can be angry too… Bees are the sentinels of our ecosystem, our pollinators, our society blueprints… and more. My DIY Hive Synthesiser performance attempts to create a symbiotic frequency relationship, like those between pollination and nectar exchanges, or between beekeeper and bees.

As a electronic music producer and seasonal beekeeper. I was inspired to learn more about bee frequencies and make a creative work that incorporated these bee frequencies in the hope of raising awareness about bees and their increasingly fragile ecology system. 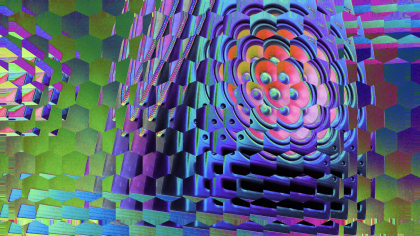 The fly vision algorithm is based obviously on the eyes of flies, “A compound eye is a visual organ found in arthropods such as insects and crustaceans. It may consist of thousands of ommatidia, which are tiny independent photoreception units that consist of a cornea, lens, and photoreceptor cells which distinguish brightness and color. The image perceived by the arthropod is a combination of inputs from the numerous ommatidia, which are oriented to point in slightly different directions. Compared with single-aperture eyes, compound eyes have poor image resolution; however, they possess a very large view angle and the ability to detect fast movement.”

The visualization code takes an image from a single lens webcam, and processes it to emulate the ommatidia. Arranged in a hexagonal grid, which is an optimal packing reached by evolution, each cell has a wide angle, with overlapping edges repeating parts of the image and enhancing the drama of moving objects. The colour of the cells are modified according to the volume levels of three frequency bands of audio (bass, mids, treble). Over time the size of the cells are modulated, zooming disconcertingly.

Artist from London interested in the complex emergent behaviour of simple systems, unusual geometries, and mathematical aesthetics. From 2005 through 2011 Claude was a member of the GOTO10 collective, whose mission was to promote Free/LibreOpen Source Software in Art. GOTO10 projects included the make art festival (Poitiers, France), the PuredyneGNU/Linux distribution, and the GOSUB10 netlabel. As part of GOTO10 Claude developed the backend for the make art and GOSUB10 websites, packaged software for Puredyne, and assisted workshops. He released two EPs on the GOSUB10 netlabel. As a software developer, Claude has developed several programs and libraries used by the wider free software community, including pdlua(extending the Puredatamultimedia environment with the Luaprogramming language), buildtorrent(a program to create .torrent files), and hp2pretty (a program to graph Haskell heap profiling output).

Curator, artist and researcher established in London since 2009. Has collaborated with various institutions such as FonotecaNacional de Mexico, Museum of Contemporary Art Barcelona, Museum of Transitory Art, or International Symposium on Electronic Arts. In 2015, she launched her independent record label EAM Elektronische-art-and-music. Laura Netzis an active participant in the hacker community. Although the artists creates her own DIY oscillators prototypes based on Hardware Hacking by Nick Collins, and also develops workshops on DIY circuitry for beginners, during Medial Dark Ages performance the artist is using prototypes from: MutanMonkey Analog Instruments, DIY opto-oscillators; Martin Howse, Detektors; and CyrilleHenry, Noizoid, MMO-3.