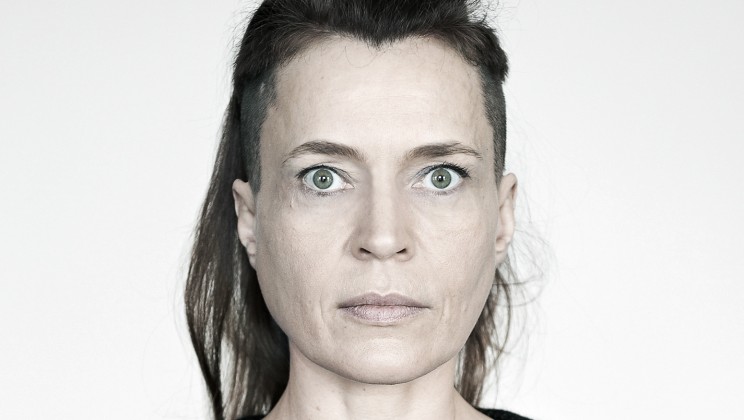 Susanne Kirchmayr aka Electric Indigo began her career in 1989 as a techno DJ in Vienna, before moving to Berlin to produce work that “oscillates between experimental club music and electro-acoustic listening music”. On Thursday 18 May, Electric Indigo will return to the UK stage – after a twenty-year absence – to perform an immersive granular synthesis piece called 109.47 degrees. This work uses “the ideal tetrahedral angle in foam” as a metaphor to describe “a multifocal society of individuals” who live in an interdependent globalised world.

Indigo is perhaps best known in the UK as the founder of the international online database Female Pressure. After having published two widely-received and quoted surveys on female roles within the music industry, Indigo and her colleagues are planning to publish a “more systematic, more extensive” report in August 2017, “with a survey of evolvement and tendencies” in music festivals across the world.

While Indigo admits that early utopian ideals within electronic music have conceded to more neutral or objective views, she also argues that progressive platforms, such as Female Pressure, open up spaces of resistance, protest and solidarity for global political causes.

In this interview, conducted over Skype, Indigo talks to Ilia Rogatchevski about the philosophy and technology behind granular synthesis, her work with Female Pressure as well as the politics surrounding the use of sampled female voices in electronic music.

Ilia Rogatchevski: You started off your career as a DJ before developing an electro-acoustic avant-garde voice. When did this transition occur?


Electric Indigo: I think it was 2002 or 2001. I was invited to play at a festival and the curator of the festival had a vision to combine two people who had never met before, who came from different musical backgrounds. I developed a concert with Mia Zabelka, an avant-garde musician. We were combining my drum machines and synthesisers with her violin and live electronics. That was kind of wild. From there, I slowly started getting to know the improvisation scene in Vienna.

Are you still improvising now?

No, not really. I do that in the course of composition, when I try out things, but the amount of improvisation has been rather reduced during live concerts. This has to do with my means of sound generation. I work a lot with granular synthesis and the tools for this are high on CPU use, so I can’t incorporate all the software synthesisers in a live set. I have to pre-record. There is a part of improvisation to every live concert, of course, but that is more about working with the sound and, to a certain degree, with effects.

What is granular synthesis?

Granular synthesis is a way to synthesise sound from pre-existing audio recordings or so-called wave tables. You have an audio wave and you use that to generate new sounds by taking a very short piece of it. These short pieces are called grains. A grain by itself is so short that the human ear cannot really recognise it as music.

The trick is that you take a lot of grains and, by multiplying and overlapping them and playing them back in various forms, you create a new sound. On top of that new sound you can apply all the normal parameters for synthesis. So you have an amplitude envelope, for example, or you can apply all sorts of filters and EQs. In this process you create a new sound that does not sound in any way like the source material.

I understand that you’ve used this method in pieces like Morpheme, which samples a quote from Sadie Plant. Do you have a political motivation for pulling apart sound sources?

I’ve been struggling with conveying a political attitude in my artistic work, because my music is very abstract and I definitely prefer abstract ways of expression. At the same time, I think it’s an artist’s duty to reflect the times we live in. I’m very often questioning myself: “How can I react?” And I have not found any satisfying answers yet.

I think, yes, one way is to use voices, but process them. I’m not too much into vocal music. Using a sentence like Sadie Plant talking about noise and cybernetics (“To let noise into the system is a kind of fine art in both cybernetic terms and in terms of making music, too.”) is just very inspiring. Having the conceptual constriction of only using this [quote], as basic raw material to develop a whole piece with, is an artistic challenge.

On the other hand, a piece like Chiffre, used 21 languages and dialects to reflect a rather pluralistic world. The problems we are facing are so complex that any sort of explicit message would seem inappropriate to me. I haven’t yet found a solution for that general problem of how to be political in my art.

Are you aware of the strand within sound theory that suggests there is an overwhelming tendency amongst male producers to cut up female voices?

I don’t know much about this issue, I must confess. What I know comes from friends who are actually singers and vocalists. For example, Caroline Churchill has had this experience with male sound engineers who would low cut [take away the bass from] female voices at 500Hz, or even higher.

I think this is a very interesting subject, but I’m not really an expert in it. I just find that the typical role of the female singer or the woman as the deliverer of some additional musical material is pretty annoying.

I’m conducting quite an interesting project about exactly this point, together with Antye Greie aka AGF, for a publication due out later this year. We started a discussion with me saying: “I have a problem with vocals in music. I like instrumental versions.” and she replied that she totally admires that each human voice is an absolutely unique instrument and that it cannot be replaced with anything else.

Maybe this is a good opportunity to ask about Female Pressure. What is it, how did it begin and why?

Female Pressure is an online database of women, non-binary and transgender artists who work in the electronic music scene, club culture and digital arts. It is a network that has been growing over 19 years and comprises of over 1,900 people from, I think, 72 countries at the moment.

I started it because, whilst touring, I was confronted with remarks regarding the exceptionality of being a woman DJ. In the beginning, I found this quite astonishing, because when I started as a DJ, I did not think about my sex or my gender. I was usually confronted with this ignorance in the middle of the night – shortly before a set at 3am, or shortly after, with 100dB or so in the room. Not ideal circumstances to adequately talk about this subject.

Usually my answer was: “Yes, it’s true. There are more guys than girls, but you must not forget…” and then I would start to list other female DJs and producers. At some point, in the mid-90s – when it was also clear that the internet was going to be a very important medium in the near future – I thought that I needed to systematise this.

It was quite clear to me that it should be a database that can be searched and could be accessible independent of time and place. Parallel to this, I also saw the necessity of communication within this network. We have been creating a mailing list and this mailing list is still our main tool for communication.

It’s hard to define what Female Pressure really is, because it’s not a collective. It’s way too big and diverse to be a collective. I rather see it as a swarm of like-minded people from many different countries. There is, of course, also potential for political action. For example, Our Rojava compilation that we did in 2016.

Have you had much involvement with the Rojava project?

Yes and no. It was Antye Greie’s idea to do something about the conflict in Syria and the Middle East, because she found out about this movement in Rojava with direct democracy and equality of women and men. Coming from that region is, of course, very exceptional and it seems to be a utopia growing in the middle of a heavy war zone. We wanted to show our solidarity and respect to the women there, holding up so strongly and fighting for the better.

I actually wanted to contribute a track, but I couldn’t for the political reasons that I talked about before. These problems are overwhelmingly severe and I could not find an appropriate artistic form to react to it.

But everything on Female Pressure is my work. I administer it and help by compiling texts and links. I had a supportive role, but not an active role with this project.

One of the things you do with Female Pressure is publish reports of women working in the music industry. The last one was published in 2015. How well was this report received and is there scope to do more work of this nature?

We are actually working on a new survey. The original plan was to release it again on International Women’s Day this year, to make it a regular biannual report. We couldn’t manage, so we decided to make the next one more systematic, more extensive and release it in August 2017, with a survey of evolvement and tendencies. We’re going to compare various festivals over the years from 2013 to 2017. We’re still in the process of collecting data and we will decide which scope we can achieve.

I think the survey of 2013 was really important, because we created huge media attention with that. It’s crazy and I can’t believe it, but we were actually the first to publish numbers about gender balance at festivals. Obviously that hit a nerve. A lot of people started to talk about this issue. The media presence and awareness is quite large, but the actual facts have not changed much. The pure commercial [festivals], they just don’t care. They have other priorities rather than making society better.

You’re coming to London soon to be perform 109.47 degrees at IKLECTIK. What is that piece? Can you talk about that?

It is a listening piece that explores how traditional instruments can be transformed. It reminds one of a trip into outer space. Every time I play this piece, it creates associations of spaceships, planets and uncanny atmospheres.

I created the music from recordings of a Baroque organ, played by myself, and recordings of the inside of a piano, played by my friend and colleague Angelina Yershova. I just found this raw material really inspiring, especially the organ, which was completely mechanical. The registers pulled only half way and sounded like breathing organisms.

The title came from a tetrahedral angle, which is the ideal angle to make foam as stable as possible. You can see it as an analogy to granular synthesis. You have little units, or bubbles, in the foam and together they form to make a completely different shape.

The reason why this came about, was an invitation to a festival called Dunkle Zeiten. The theme of the festival was membranes. Thinking about membranes, I thought about these bubbles. I also had to think about [Peter] Sloterdijk and his Spheres trilogy. Sloterdijk thinks about foam as a whole society. There are all these little social bubbles, but together they are a bigger structure, a bigger society.

Electric Indigo will perform ‘109.47 degrees’ at IKLECTIK on Thursday 18 May. Click here to buy tickets. For more information about Electric Indigo and her work, please visit her website.